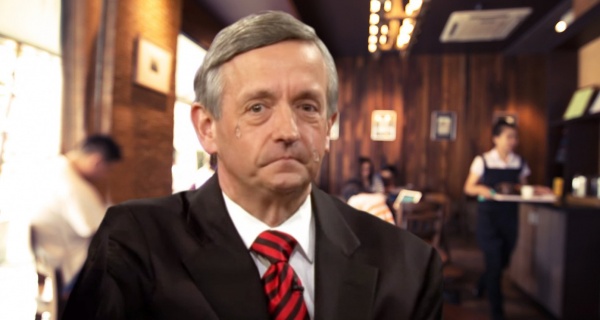 On Tuesday, President Donald Trump accused Jews who vote for Democrats of being disloyal to Israel. The president’s comments conjured the anti-Semitic trope of Jewish dual loyalty. Ironically, the president has claimed that Rep. Ilhan Omar (D-MN) is an anti-Semite.

Texas megachurch pastor Robert Jeffress is one of Trump’s closest spiritual advisors. The pastor doubled down on the president’s comments in an appearance on Fox News radio show, Patheos reports.

“And the question he (Trump) is raising about how can American Jews support Democrats who support people like [Ilhan Omar and Rashida Tlaib], despicable representatives of our country who are antisemitic to the core, how can Jewish Americans support that?” he said.

“It makes no sense for those Jewish Americans not to support a president and a party that stands for Israel like Donald J. Trump does…” he added.

Jeffress also slammed Bernie Sanders for pushing back on Trump’s comments. “I am a proud Jewish person, and I have no concerns about voting Democratic,” Sanders said. “And in fact, I intend to vote for a Jewish man to become the next president of the United States.”

“… I mean it’s obvious Bernie Sanders is completely illiterate when it comes to what the Old Testament teaches about Israel,” Jeffress said.

For context, Jeffress quoted the part of the Old Testament about multi-generational curses.

Listen to Robert Jeffress rant below: