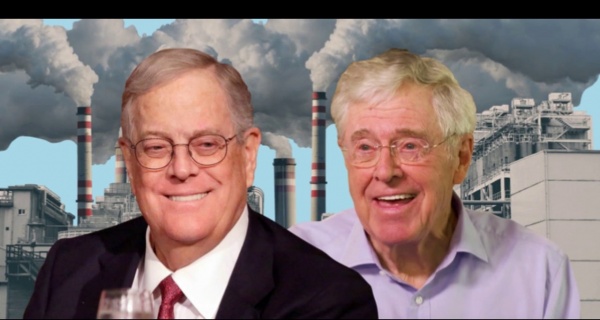 The mega-billionaire brothers, David and Charles Koch, stand apart in the world of Republicans.

In 2012, their network of hardcore libertarian political donors spent $400 million on negative campaign ads intended to destroy government safety nets and defeat Democrats. They want to repeal Obamacare, dismantle labor unions, repeal any environmental law protecting clean water and air, roll back voting rights, privatize Social Security, stop a minimum wage increase and more. They don’t care about destroying the checks and balances in American democracy to get their way.

In an updated documentary by Robert Greenwald’s Brave New Films, Koch Brothers Exposed: 2014 Edition, we learn many things the Kochs don’t want you to know, from the origin of their radical agenda to other issues they’ve championed that haven’t made the national news, such as resegregating public schools.

Here are 11 things the Kochs don’t want you to know about them.

1. The family’s $100 billion fortune comes mostly from a massive network of oil and gas pipelines, and investments in other polluting industries like paper and plastics. The brothers inherited the seed money for their holdings from their father Fred Koch, who made his first fortune building oil pipelines for the Russian dictator Joseph Stalin in the 1930s. Back in the states, Fred Koch supported racial segregation and white supremacist groups like the John Birch Society.

2. Koch Industries is the second-largest privately held company in America, worth upwards of $80 billion. It is one of the country’s top 15 polluters, responsible for more than 300 oil spills. It has paid over $100 million in fines and been found guilty by a federal jury of stealing oil from Native American lands.

3. The Kochs have invested multi-millions in more than 85 right-wing organizations over the years to push an anti-government, libertarian agenda. Many local Tea Party chapters were fronts for Americans for Prosperity, one of their groups. Another big recipient, ALEC, or the American Legislative Exchange Council, drafts bills and talking points that Republican officials cite again and again. In the 2012 presidential election cycle, the Koch’s right-wing donor network spent $400 million on electioneering.

4. The brothers work to create legal decisions to empower their efforts. They brought two U.S. Supreme Court Justices, Antonin Scalia and Clarence Thomas, to give speeches at their invitation-only gatherings for libertarian industrialists. That was before the Court issued its Citizens United ruling, gutting federal laws that restricted the kinds of outside campaigns they bankroll. They funded groups that filed thousands of pages of legal briefs to attack those election laws. After the Court threw out federal campaign restrictions in 2010—a ruling they help to write—the Kochs began to spend unprecedented sums to sway elections.

5. Americans for Prosperity led a successful takeover of the school board in Wake County, North Carolina in 2009, which then ended student busing to resegregate high schools. They resurrected the coded rhetoric of the old South, using terms like “forced busing” and “neighborhood schools.” After hundreds of students were sent to other schools, the uproar was so great the AFP slate was voted out two years later, but not before the kids experienced racism and prejudice.

6. As donors to higher education, the Kochs have designed grant agreements with more than 150 colleges and universities where they restrict academic freedom by exerting control over who gets hired. The programs they fund present only their views in class, curricula and in their research. They promote pro-business, libertarian inquiry, which does not allow the facts and results to lead to their own conclusions. Faculties at many universities have protested these donations and threats to academic freedom.

7. AFP was one of the lead groups in Wisconsin, encouraging Republican Gov. Scott Walker to revoke collective bargaining agreements with public employees—except for police and firefighters, who tend to support the GOP and law-and-order politicians. Through national legal advocacy groups like ALEC, they have introduced scores of reactionary anti-union bills in dozens of states.

8. Other Koch-funded efforts include the Republican national effort to unduly police the voting process to discourage young people, minorities and senior from casting ballots. The reactionary voting rights bills they have introduced in dozens of states impose stricter voter ID requirements, which do not prevent people from registering to vote but will keep them from getting a ballot if they cannot present specific paperwork. AFP and other Koch-funded groups, such as True The Vote, have recruited and trained mostly white poll watchers to challenge the credentials of mostly non-white voters, creating a climate of fear and intimidation around voting.

9. The Koch brothers make $13 million a day from their investments, but they want to eliminate minimum wage laws and oppose any increases. People earning the federal minimum wage earn about $60 a day. A minimum-wage worker would have to work almost 700 years to earn what the Kochs make in a day. (Koch-funded politicians have proposed 67 bills in 25 states to reduce the minimum wage.)

10. The Koch brothers want to destroy the most popular government program of all, Social Security, by funding right-wing think tanks that spread misinformation about Social Security’s long-term financial health, claiming it will not survive. They want people to invest their retirement savings on Wall Street, which is riskier and would earn billions in fees for investment firms. They want to raise the retirement age for Social Security to 70, which would especially penalize blue-collar workers who do manual labor, as their bodies wear out more quickly than white-collar workers.

11. The Koch brothers’ massive investments and holdings are literally killing the planet because their primary business is transporting gas and oil. That includes the Canadian oil tar sands, which is the dirtiest source of fossil fuel on earth. If these sands are developed for the U.S. or Chinese markets, it would be the biggest carbon bomb in decades, hastening the progress of global climate change.