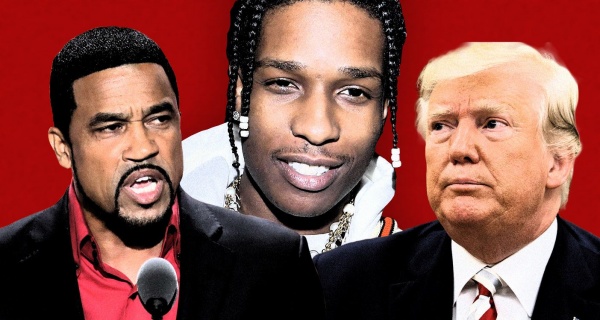 When rapper A$AP Rocky was freed from detention in Sweden and returned to the United States earlier this month, it marked the end of a bizarre saga that at one point involved the president; his son-in-law, Jared Kushner; and the State Department’s top hostage negotiator. Though President Trump’s campaign to free Rocky appeared to end well, a behind-the-scenes battle provides a unique glimpse into the unusual characters and fraught tensions involved in Trump’s outreach efforts to the black community.

According to new details provided by sources involved, Trump’s role in pushing for Rocky’s release started with a reality television megastar calling the West Wing, a mysterious entertainment industry “fixer” and two Trump supporters. The president’s allies who connected Rocky’s team with the White House hoped to facilitate a scene that would bolster Trump’s image among African-Americans. Instead, they say they were left angry when Rocky failed to thank Trump or those around him.

Rocky’s legal woes began on June 30, when he was involved in a street brawl in Stockholm. On July 5, a Swedish court ruled that Rocky and two of his associates were flight risks and needed to be detained as the investigation into the incident continued. Rocky claimed he had acted in self-defense and released videos on Instagram showing that the man he hit had followed him through the streets. The rapper, whose real name is Rakim Mayers, ultimately spent nearly a month in detention.

Behind the scenes, the White House and its unconventional allies scrambled to secure Rocky’s freedom.

Darrell Scott and Kareem Lanier entered the picture a few days after Rocky was detained. Scott, an Ohio pastor, was one of Trump’s highest-profile African-American surrogates during the 2016 campaign and went on to serve on his transition team. Lanier is the co-chairman of the Urban Revitalization Coalition, a nonprofit led by Scott dedicated to promoting elements of the Trump agenda to the black community. The two men, who were hardly household names, have become a regular presence at the White House at events focused on addressing African-American issues.

Scott and Lanier said they became involved after hearing from a man named Hassan Muhammad, who describes himself as a “fixer” for high-profile figures in the entertainment industry. In a pair of phone conversations this week, Muhammad, who has no web presence and was unwilling to name any of his contacts, said an associate of Rocky’s reached out to him about the rapper’s situation.

“I know how to handle or solve problems,” Muhammad said.

Muhammad, who had met Scott and Lanier in 2017, reached out to the two Trump associates for help on July 10, just five days after the Swedish court ruled that Rocky should be detained. “If you are in a situation like this, then there's only one or two places you call, the White House or the State Department,” Muhammad said to Rocky’s team, adding, “I know somebody at the White House.”

While Scott said he was initially skeptical of Rocky, he decided to get involved after watching full videos of the incident that left him feeling the rapper had been harassed by the man he was accused of assaulting and then “railroaded” by the Swedish justice system. Lanier said he viewed Rocky’s detention as “a black man that we believe is innocent stuck in jail.”

The two men also saw a case that would appeal to Trump, who has backed bipartisan criminal justice reform and issued pardons and interventions in individual cases. Scott and Lanier thought Rocky’s case could be a similar opportunity. “The president is so pro-criminal justice reform, sentencing reform ... we knew this would be something that would be right up his wheelhouse,” Lanier said.

After Muhammad told Lanier and Scott about the case, he put Lanier on the phone with Rocky’s manager, John Ehmann. Lanier said Ehmann was adamant that Rocky needed presidential intervention. “He said if the White House does not get involved, Rocky is screwed,” Lanier recounted.

Scott and Lanier claimed they made clear to Ehmann that they had one requirement.

“The White House didn’t ask for anything. There were no conditions attached, but my condition and Kareem’s condition was that all I’m asking for you guys to do is say thank you,” Scott recalled telling Rocky’s manager.

According to Scott, Ehmann responded, “If a serial killer gets Rocky out of jail, I would have no problem saying thank you to the serial killer.”

With that out of the way, Scott and Lanier reached out to Kushner, the president’s adviser and son-in-law. Kushner became their main point of contact in the West Wing.

A source close to Kushner said there were “two streams” of people who were in touch with him about Rocky’s case. Scott and Lanier were one, and reality television star Kim Kardashian was the other. Kardashian, an advocate of criminal justice reform, has also visited the White House to push for the release of individual prisoners. The source said Kardashian was urged to advocate for Rocky by her husband, Kanye West, the rapper who controversially declared support for Trump and had an Oval Office visit of his own in late 2018.

According to the source, after Kushner heard about Rocky, he “brought it to the president,” who tasked Secretary of State Mike Pompeo with taking “the lead” on the issue. However, both Kushner and Trump stayed involved. The White House did not respond to a request for comment.

Scott and Lanier provided Yahoo with copies of emails, texts and chat messages that they said came from Ehmann and other members of the rapper’s team.

In messages that were dated July 11, Ehmann passed along an email address for Swedish prosecutor Fredrik Karlsson and provided a document listing “talking points” that could be used in emails advocating for Rocky’s release. Scott then emailed the prosecutor, highlighting his own ties to Trump.

“I’m reaching out to you, with all due respect for your great Country, and for the office you hold, on behalf of the Artist known as A$ap Rocky. ... I by no means intend any offense, nor disregard for your country’s legal system, nor for your acumen as a Prosecutor,” Scott wrote.

Scott described Rocky’s potential release as “a tremendous demonstration of goodwill, not only between our two Countries, but also between your Country, and the African American Community in the United States.”

He said Karlsson did not respond to the email.

On July 12 Trump traveled to Cleveland, where Lanier and Scott said they saw the president and discussed Rocky’s case. Scott also said he and Trump talked about the situation in a subsequent phone conversation in which the president asked, “What do you think about this Rocky guy?”

Seven days after the Cleveland trip, Trump weighed in from the Oval Office as he fielded questions from reporters.

Later that day, Trump announced on Twitter that he had spoken to Kanye West about the case and planned to call the Swedish prime minister. The source close to Kushner said it was the president’s son-in-law who set up the call with West.

But by this point, it seems tension had built up between the rapper’s associates and the Trump allies. Scott and Lanier believed Damien Granderson, an attorney working for Rocky, was too “nonchalant” about the news that Trump was lobbying on the rapper’s behalf. Lanier said he “snapped” at Granderson and cursed him out.

“I was like, man, you ungrateful motherf***ers, you. I can’t believe you. ... We didn’t ask you guys for nothing other than for you guys to be grateful,” Lanier said he told him. “We just want you guys to be appreciative and say thank you.”

Granderson did not respond to multiple requests for comment.

Despite the angry exchanges, Lanier said he and Scott continued to work with Rocky’s team because they believed the rapper was innocent and had been treated unfairly.

After speaking with the prime minister, Trump took to Twitter and said he had “assured” his counterpart that Rocky wasn’t a “flight risk” and “offered to personally vouch for his bail, or an alternative.” Lanier said Kushner reported back and said Trump suggested that Rocky could be held in the U.S. Embassy or a hotel until his trial was completed.

The messages provided by Lanier and Scott indicate they stayed in touch with Rocky’s team after this call. In a July 21 message, Ehmann passed the two men a note from Rocky’s Swedish lawyer, Slobodan Jovicic, that said Trump’s personal assurance that the rapper would not be a flight risk could be a “game changer” as they sought his release from jail.

“No American president has made this kind of a guarantee before,” Jovicic said in the email. “As I see it, this is new evidence and they can never use this move against us i.e. it can’t be wrong to think that a guarantee from America’s president can make a difference.”

Jovicic did not respond to a request for comment and questions about his statements in the email.

Rocky stayed in detention for nearly two more weeks, while Trump continued to send angry tweets directed at the Swedish prime minister and dispatched the State Department’s top hostage negotiator to Stockholm to work on the case. The president’s actions on Rocky’s behalf prompted some critics to accuse him of pandering to the black community with his highly public efforts.

Lanier dismissed that argument. “He won the election with 8 percent of the black vote,” he said of Trump. “He doesn’t need black voters or need A$AP Rocky to get black voters. ... He did this because it was the right thing to do.”

On Aug. 2, when the trial concluded, Rocky was released and allowed to return to the United States even though a verdict had not been reached in the case.

When they got Ehmann on the phone, Scott said the rapper’s manager “started making all these excuses” about Rocky needing time to travel and “rest.” Scott said he told Ehmann, “I hope you guys aren’t going back on what you said you were going to do.”

On the day of his release, Rocky put a post on Instagram thanking fans and friends who supported him.

Scott dismissed this as “generic” and kept pressing Ehmann about when Rocky would do something specifically thanking the White House. Scott said it was “embarrassing” to have to tell Kushner, who reached out to him after Rocky’s release, that they had no communication from the rapper.

According to Lanier, Ehmann promised to put a Kushner-Rocky call together within “48 hours.” But then Lanier said Ehmann stopped “returning our text messages.” The two men kept pressing Rocky’s team.

On Aug. 14, a panel of judges announced that they found Rocky guilty of assault but would not require him to serve any prison time. Rocky responded with another broad message of gratitude that didn’t name the White House.

Both Lanier and Scott were upset that Rocky never acknowledged the assistance he had gotten. Lanier attributed this to the potential blowback that an African-American celebrity like Rocky could face for embracing Trump.

“One of the problems that we have as a culture — and I’m talking about black Americans — is herd mentality,” Lanier said. “Right now it’s popular for those guys to bash President Trump.”

The two men said they were left disappointed that Rocky didn’t thank the White House — even behind the scenes.

“All he had to do was do a two-minute call to say thank you,” said Scott. “Rocky hasn’t even called us and said, ‘Hey, man, thank you guys. I appreciate it,’ in private. Just in private.”