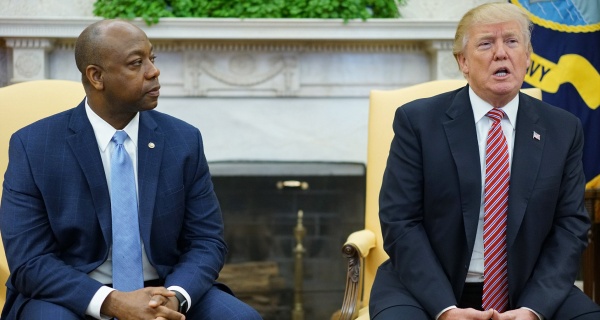 This is from the same person who refuses to say Trump or Iowa Republican Rep. Steve King are racists.

Sen. Tim Scott can’t stop tap dancing for Trump. The man who refuses to say Donald Trump is a racist is now claiming that Democrats are trying to “dupe” Black voters by saying our president is racist.

The only Black Republican in the Senate was on Fox News (of course) as they showed a montage of Democratic candidates calling out Trump racism. The South Carolina Senator then babbled, “This is an opportunity for the Democratic Party to try to figure out a way to dupe the African American voters, not only in South Carolina but around the country because they really have nothing but empty promises to run on.”

Clearly, Scott is afraid of being voted out in 2020.

He then went on to give Trump credit for Obama’s economy, cited the talking point of the 1994 Crime Reform, which was loved by Republicans at the time, and the First Step Act, which Trump had no hand in developing. He also ignored the endless racism from our president, which Fox News did not challenge him on.

This isn’t a shocker. Scott has been defending Trump for eons.

Back in March, he said about Trump in an interview with Politico, “I am not unaware of the president’s past,’ he tells me. A long pause. ‘Do you think he’s a racist?’ I ask. Scott shakes his head. ‘I don’t. I don’t,’ he replies. ‘Is he racially insensitive? Yes. But is he a racist? No.'” He stressed the same delusion to the Wall Street Journal by saying, “I think he’s had some racial insensitivities. The progress we’ve made, I think, is more important than the rhetoric.” If you considering rolling back Obama-era prison reforms, tearing apart children at the border, or a tax break that allowed General Motors to lay off 14,000 people — then that is “progress.”

Moreover, how is a 53-year-old man who attended Charleston Southern University and has been in government since 1995 not be aware of his president’s history?

Just last week, Scott said on Fox News, “Well, there’s no doubt that President Trump is not a racist.”

He even said Iowa Republican Rep. Steve King wasn’t racist, who has a history of making racist comments.

Sounds like Tim Scott is the one who is duped, being in a party of racists and that is 90 percent white and male.