Susan Collins: Will Her Loyalty To The Republican Agenda Finally Doom Her? 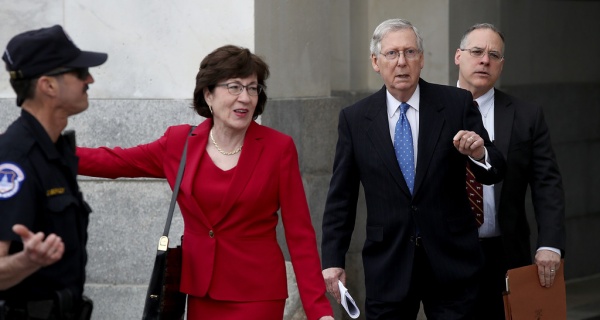 Republican Susan Collins is caught in the cross-fire of the angry partisan division that’s defining the nation’s politics, turning her from a shoo-in for re-election into one of the most vulnerable senators running in 2020.

After spending four terms building a bipartisan brand in her home state of Maine, Collins has stoked anger from Democrats for her votes in favor of President Donald Trump’s tax cuts and his Supreme Court pick of Brett Kavanaugh, and from Republicans for helping save Obamacare and her frequent criticism of the president’s statements and behavior.

Collins’s once sky-high approval ratings have plunged more than any other senator in the Trump era, and last week the non-partisan Cook Political Report put her Senate seat -- one of just two in GOP hands in states won by Hillary Clinton and being contested in 2020 -- in the toss-up category.

The question for Collins, 66, is whether the power of incumbency and her reputation for bipartisanship can overcome a fierce Trump-era backlash.

“The people of Maine have known me, and they know that I have been a hardworking, independent advocate for them, who votes with integrity,” she said in a series of interviews. “Should I choose to seek re-election, I’m confident it will go well.”

There are plenty of headwinds for Collins though, starting with her complicated relationship with the president and his policies. While Collins still projects confidence about her chances, losing that seat would rob the Republican party of one of its few remaining moderate voices and put the Senate majority within closer reach for Democrats.

Angry Democrats aren’t hard to find in Maine, even at a community parade in Buxton where Collins was warmly cheered by many residents as she jogged past in her New Balance sneakers -- the company has factories in Maine -- followed by her supporters in red Susan Collins T-shirts.

“I’ve supported her ever since she went to Washington. I was extremely disappointed with the Kavanaugh vote,” said Donna Sawyer, 72, of Limington, a former host of a local gardening television show. “I will never vote for that woman again!”

Al Mingione, 69, of Buxton, said he also voted several times for Collins but won’t anymore after her Kavanaugh vote. He said he doesn’t “want a guy like that on the Supreme Court,” adding that he also wants to see the Senate go Democratic.

“I’m tired of them doing nothing,” Mingione said in reference to the current Senate, led by Republicans. “How many shootings have we had?”

Democrats need to flip at least three Senate seats for a chance at control of the chamber. Maine, Colorado and Arizona are their top targets.

National Democrats have settled on Maine House Speaker Sara Gideon as their choice to take on Collins. They hope she can harness the energy that helped the party take the state’s governorship, state Senate and the lone congressional seat from Republicans in 2018 while also expanding their state House majority.

The battle is already well-funded. Gideon raised more than $1 million in the days after her online announcement. Opponents of Collins have raised $4 million for the eventual Democratic nominee. Collins, meanwhile, reported raising $2 million in the second quarter and had $5.4 million on hand, according to Federal Election Commission records.

Gideon still faces a primary against progressive activist Betsy Sweet, who is running on a platform including Medicare for All and a Green New Deal, as well as lawyer Bre Kidman and Jonathan Treacy, a retired Air Force general. Conservative blogger Derek Levasseur launched a long-shot challenge from the right in the Republican primary. Independent lawyer Tiffany Bond is also running.

Rather than talk about Trump, Collins is much happier discussing local issues at places like Valley View Orchard Pies in tiny Oxford, where she visited earlier this month to see how a $100,000 federal community development grant will help the small business expand. An hour later she was talking to state and local officials about a road project, ending spam cell phone calls, microlending for local businesses, apprenticeship programs and other policy proposals. She then traveled up to rural Bethel to attend a celebration of a new community forest funded in part with $600,000 from a federal conservation program she championed.

A bipartisan audience cheered her speech -- the kind of moment a beaming Collins acknowledged is very different from what she’s experienced at times in Washington in the past year, where she has gotten death threats and faced protests regarding her vote for Kavanaugh.

But even the Kavanaugh issue has gone both ways. Collins noted that two people came up to her that day in Maine to quietly thank her for her vote.

She also retains a well of support from voters who tout her ability to bring people together, as well as those who appreciate the clout she brings their small state in Washington.

“You know who’s going to be the next chairman of the Appropriations Committee should I choose to run?” she asks, pointing at herself and smiling.

For James Vallilee, 56, of Farmingdale, a Republican machinist at the Bath Iron Works working on Navy destroyers, a vote for Collins is a vote for job security.

“If Bath Iron Works wasn’t there, that whole mid-coast would be a pretty depressed area,” he said, crediting Collins with helping keep the defense industry-funded. “She’s in the shipyard a lot.”

Stephen Heroux, 59, of Buxton, said he will vote for Collins, citing her stature in Washington. “She’s good for Maine,” said the construction contractor who said he’s previously registered Democrat, Republican and independent.

But like other Republican senators, Collins has to be wary of angering Trump’s most fervent supporters. Chip Sirois, 48, of Windsor, insists he and many other Trump supporters won’t vote for Collins again, citing her frequent criticism of the president.

“Trump’s my president,” he said, adding that if Collins doesn’t like Trump, she should “get out of office. She’s been there long enough.”

Sirois says he’ll vote for Collins’ primary challenger Levasseur, who promotes his opposition to abortion and his support for Trump’s emergency declaration on the border.

“The problem that I see is there is such distortion and misrepresenting of my record by a coalition of groups on the left,” she said.

While national Democrats have lined up behind Gideon, Sweet promises a hard-fought primary. Both Senate hopefuls, in separate interviews, insisted that the party will be united by the desire to defeat Collins.

One issue roiling the state is gun control. The Democratic state legislature rejected proposals like a red flag law and broader background checks, much to the chagrin of Gideon, Sweet and activists who held a candlelight vigil recently at the state Capitol calling for action.

Collins’ chief of staff, Steve Abbott, said the gun issue could lead to an easier path to victory for the incumbent senator if Gideon goes too far left for Maine, where voters in 2016 narrowly defeated a background check referendum.

Collins said she doesn’t like the U.S. House-passed background check bill supported by Gideon because it doesn’t have enough exemptions for family transfers -- a key issue for many voters in Maine.

Collins said she’s supporting an effort to revive the Manchin-Toomey background check bill that she voted for in 2013. She has also backed federal red flag legislation authored by Florida Republican Marco Rubio, as well as other gun measures like her “no-fly, no buy” proposal to ban people on the terror watch list who are barred from flying from being able to buy a gun.

Gideon so far is keeping a lot of her cards close to the vest, dinging Collins on Kavanaugh, taxes, health care, and guns but not yet laying out an expansive policy vision herself. In an interview at a Democratic Party lobster bake in Waldoboro, she went directly to what is sure to be the Democrats’ main line of attack against Collins and other vulnerable Republicans.

“She has aligned with Donald Trump and Mitch McConnell at a time where people feel more and more worried and more and more left behind,” Gideon said.