Congressman Steve King: If Not For Rape And Incest, 'Would There Be Any Population Left' 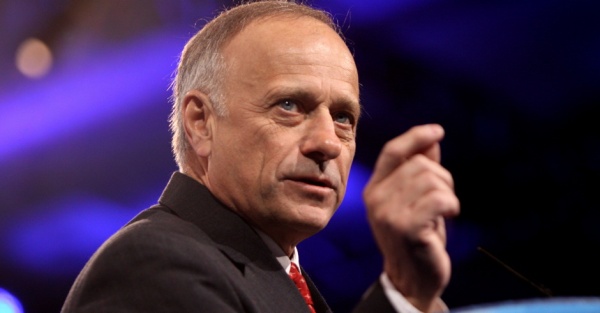 U.S. Rep. Steve King told the Westside Conservative Club on Wednesday that humanity might not exist if not for rape and incest.

"What if we went back through all the family trees and just pulled those people out that were products of rape and incest? Would there be any population of the world left if we did that?" he said at the event in Urbandale, Iowa.

"Considering all the wars and all the rapes and pillages taken place and whatever happened to culture after society? I know I can't certify that I'm not a part of a product of that."

The Kiron Republican was defending his position of not allowing exceptions for rape and incest in the anti-abortion legislation he tried to pass in Congress. Republican leadership had prevented the bills he sponsored on banning abortions from advancing through the House, despite GOP support for the measures, King said.

Just because a conception happened in bad circumstances doesn't mean the result isn't a person, King, who is Catholic, argued.

"It's not the baby's fault for the sin of the father, or of the mother," he said.

In the hours after his comments to the breakfast meeting, condemnation of his comments poured in from Democrats, including those running for president, as well as some Republicans.

King went over his positions on abortion and a variety of other issues, including immigration, guns and more, when he talked to a group of 50 people at the Machine Shed in Urbandale at a breakfast meeting.

He also discussed the criticism he faced over a New York Times quote on white nationalism and white supremacy in January. He said he was told by political insiders that there was a plot to take him out of power.

"People think it was an organic media feeding frenzy, but no, it was orchestrated from the beginning," he said Wednesday. "They had told me, 'Heads up before Christmas: They're going to try to drive you out of office and get you to resign.' Within 24 hours, you had people saying 'resign, resign, resign.' Why? Because the New York Times misquoted me?"

King said there was a plan for President Donald Trump to criticize him as well, but he met with Trump and said there's "no signal from Donald Trump that he's anything other than supportive of me."

That didn't stop other members of his party from coming after him, he said. Multiple high-level Republicans decried King's comments in January and others have publicly supported Feenstra's primary bid.

King was also removed from his House committee assignments by U.S. House Majority Leader Kevin McCarthy. Later in January, the House passed a condemnation of white supremacy and white nationalism.

While he does not support the "odious ideology" of white nationalism, King said he supports his defense of the West, calling the United States "the flagship for Western civilization."

Some Westside Conservative Club members, like Rick Herron, a 72-year-old Clive resident, said they liked what King had to say. Herron said he has been a supporter of King's policies in the past, but was glad to get the chance to hear the "white nationalism" controversy story from his perspective.

"I did get a little better understanding of what he went through, in terms of the 'Never Trumpers' attack on him and setting him up for condemnation," Herron said. "You expect the Democrats to attack him, but not the Never Trumpers — members of his own party."