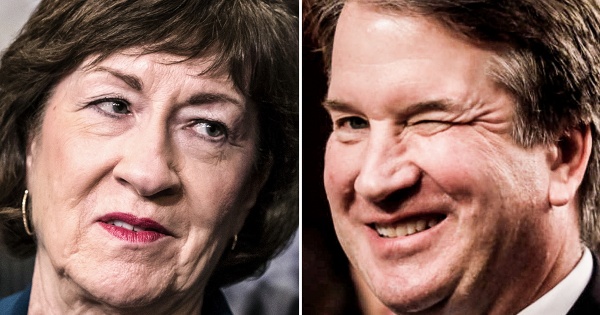 Sen. Susan Collins took time out of her busy schedule of being extremely disappointed that people expect her to do something about gun violence to attend a fundraiser on Friday. A fundraiser on her behalf. Held by Leonard Leo, Donald Trump's "judge whisperer."

Remember all that hand-wringing we saw from Collins last fall over her vote for Brett Kavanaugh to the Supreme Court? It was kabuki. The fix had been in for a long time, with Collins reportedly giving Mitch McConnell the green light for her vote on this nomination before it happened. Now that she's hobnobbing with Federalist Society executive vice president Leonard Leo—and he's raising buckets of money for her—the quid pro quo is staring us in the face.

She's already received the maximum contribution from Leo, $2,800. So now he's opened the doors of his $4 million mansion for Collins and all his rich friends—who got a big tax break thanks to Collins' vote on that Trump tax scam—to say thanks. Leo has become increasingly high-profile since Trump got installed in the Oval Office, even taking a leave from his job at the Federalist Society to specifically get Kavanaugh on the court. He has unprecedented sway and say over Trump in judicial nominations, ensuring that the courts get packed with young judges who have extreme anti-abortion, anti-LGBTQ rights, and anti-voting rights records.

Maine voters are paying attention, including the 20 or so Mainers who found out about the Leo fundraiser and were there to protest. They included Gail Leiser, who said, "I'm out here because there is nothing moderate about the Federalist Society and there’s nothing moderate about the many judges they have put forward—including Brett Kavanaugh—that Susan Collins has approved. […] Susan Collins was elected as a moderate—unfortunately she has abandoned everyday Mainers and now votes in lockstep with the most right-wing elements of the Republican Party."

Enough is enough. Please give $1 to help Democrats in each of these crucial Senate races, but especially the one in Maine!