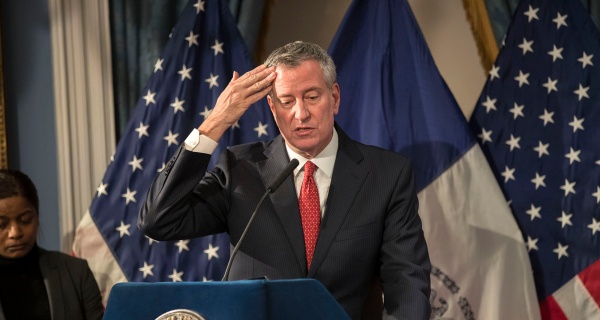 The conservative host and longtime de Blasio basher has scored his first-ever interview with Hizzoner, which is set to air Wednesday at 9 pm. It will focus on the 2020 presidential election, de Blasio’s candidacy and top new headlines of the day.

In the past few weeks, Hannity has leveled several attacks against the lefty pol, including posting a video on Facebook, dubbed “The Worst of Mayor Bill de Blasio,” which rips him for allegedly setting a citywide tone where cops can be doused by buckets of water by thugs without penalty.

He’s also posted a story on his website titled, “De Blasio unglued,” which criticizes the “failing” mayor for saying President Donald Trump isn’t welcome back in the Big Apple after he leaves the White House.

De Blasio — whose poll numbers in the presidential race are at a meager 1 percent — is a longtime critic Fox News and the New York Post.

When asked Monday night about the strategy of agreeing to be grilled by Hannity, de Blasio told NY1 “it does not in any way change my criticism of NewsCorp and Fox News.”

“It’s also right to acknowledge that millions of millions of Americas are watching [Fox News] and we shouldn’t stereotype them,” he added.

“I think it is important to challenge those right-wing voices, so I am not for a moment going to change what I think about that venue but, while we are having presidential elections, we have to speak to  all of America.”