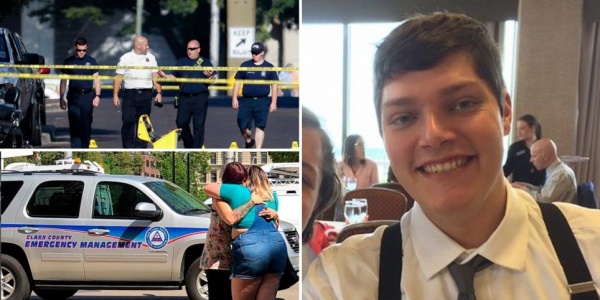 People are still trying to understand why 24-year-old Connor Betts from Bellbrook, Ohio, killed nine people — six were Black — in Dayton’s historic Oregon District on Saturday night. However, one of the victims was his sister, Megan Betts, who was reportedly dating a Black man. There were theories on social media blaming that as the motive for the shooting.

Betts opened fire in Dayton’s popular entertainment district. Within 32 seconds, he used an AR-15-style assault rifle and a 100-round drum to kill nine people and then headed to the bar Ned Peppers, which is reportedly a well-known bar for the Black community. He was reportedly wearing a mask, ballistic armor and carrying a black rifle.

“U.S. media reported that his sister had been found dead in a car with her boyfriend,” the BBC reported. “But police said the male she was shot alongside was a ‘companion of the suspect’ and did not elaborate on the relationships.”

One Twitter user blamed the killings on the shooter’s purported racism.

“The shooter in Dayton killed his sister because she was dating a black man. He then proceeded to kill 5 more black people just because. There is a sickness in this country and Trump’s racist rhetoric had emboldened that sickness. #TrumpsTerrorists #ThisIsAmerica,” the tweet read.

Another Twitter user seemed to make the same connection.

“Dayton shootings were racially motivated. Killer murdered his sister for dating a black man. I simply cannot process this,” that tweet said.

The dead were identified as:

Obviously, race would not be a shocking angle. The El Paso shooting was reportedly the result of a young white man’s anger over Mexicans in the U.S. The 21-year-old white supremacist wrote in a manifesto that he was decidedly against “race-mixing” and supports the idea to “send them back.” He also believed in genocide.

Just last week, Santino William Legan killed multiple people attending the Garlic Festival in Gilroy, California. Legan left behind social media posts that show he may have been a white supremacist or at least sympathized with the racist movement. The final social media post-Legan made prior to the July 28 shooting endorsed a book that has been widely tied to white supremacist hate groups and ideology.

This is America and there is one person who revels in hateful rhetoric that inspires the worst part of American culture.