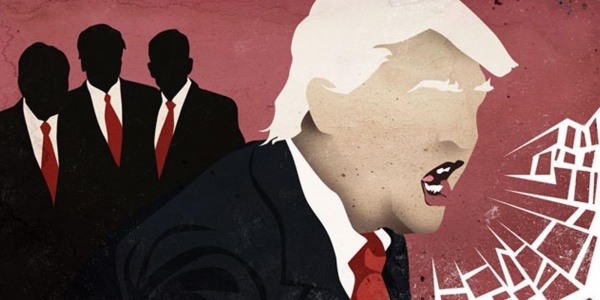 When Donald Trump tweets something patently racist, as when he tweeted the squad of four should go back where they came from or when he derided Baltimore as “rat and rodent infested mess,” media pundits can spend days debating whether or not Trump is racist.

The idea seems to be that if Trump can be declared a racist and enough people admit he is racist, somehow that settles some ongoing and open deliberation for which the national audience has been on tenterhooks awaiting a verdict—as if determining he is a racist will be a “gotcha!” moment and his 2020 chances for re-election all but annihilated.

Uh-oh! Trump’s a racist! We can’t elect him.

Ex-post facto spoiler alert: the electorate knew in 2016 what his racial attitudes were.

Instead of discussing Trump’s racial attitudes and having heated arguments about whether or not they rise to the level of racism, perhaps a more effective approach to addressing the electorate is to actually discuss in analytical ways how racism works and how racism impacts their lives in negative ways; how the racial attitudes to which Trump gives expression, if they were to inform policy, would not actually uplift the lives and economic conditions of white voters but rather worsen them.

Last October, for example, the Chicago Metropolitan Agency for Planning (CMAP), in its 30-year blueprint for regional economic development, cited racial and ethnic inequality, particularly as manifested in African American unemployment, as the most significant obstacle to addressing Chicago’s lagging, even stalled, economic progress. As the blueprint’s executive summary puts it, “Metropolitan Chicago simply cannot thrive when so many people and places are left behind. Despite our numerous enviable assets, we fall short of ensuring economic opportunity for all residents. Though also true of many other regions, this unfortunate reality is particularly evident here.”

While the agency presents many solutions, a key element emphasized is the need for “prioritized investments” rather than the tax cuts that many political conservatives consider crucial.

It is precisely this the type of thinking and outlook, however, which is rooted in social reality and history and which would help most to create an effective economy for all, that Trump is able to manipulate by deploying racist ideology.

CMAP is basically making the argument that a rising economic tide lifts all boats. We hear this argument all the time from politicians who argue that tax cuts for the wealthy—or, another way off putting it, investments in the wealthy—stimulate economic growth and thus help everybody. CMAP, however, has identified the key obstacle to growth not as a lack of investment in the wealthiest among us but in a lack of investment in racial and ethnic communities, in racial and ethnic economic disparities.

Thus, what would help lift all boats is investment in communities of color, those communities have in fact endured significant disinvestment over the years.

But calls to invest in communities of color, even if that investment would benefit all, are precisely what trigger racial resentment, what some call racism, and which we need to discuss. Resorting to shorthand labels like “racist,” which lead to dismissal rather discussion, won’t help us challenge Trump’s racial attitudes and the resentments he so artfully and maniacally stirs up.

Study upon study show us that racism and sexism are key drags upon the economy and keep us from availing ourselves as a society of all the human productivity at our disposal, productivity that could be put to use to serve our needs.

Thus, overcoming the obstacles in our thinking that prevent us from doing so is key.

In her 2016 New York Times bestseller Strangers in Their Own Land: Anger and Mourning on the American Right, Arlie Russell Hochschild heads deep into the Louisiana bayou to understand the prevailing attitudes among white people suffering economically and why they seem to vote for conservatives who do not seem to support policies that help them economically.

Put crudely, Hochschild finds that the animating belief in this culture is that there is a line in America of those waiting their turn for economic reward, and immigrants and people of color are trying to cut in that line, aided and abetted by liberal democrats in Washington, D.C.

Call it racism. Call it racial resentment. Call it simply a powerful cultural belief. It needs to be discussed and analyzed, not judged and dismissed. We need to talk about how this view of the line, this sense of a need to have a rightful advantage, actually works against these whites’ well-being.

In her powerful book White Rage: The Unspoken Truth of Our Racial Divide, Carol Anderson offers a powerful analysis off U.S. history from Reconstruction forward, looking at how white resentment toward African Americans, cultivated since the emancipation of enslaved African Americans, has in fact undermined both capitalism and democracy. Among many arguments and analyses she offers, she points out how African Americans have historically been undermined through racially discriminatory and downright repressive laws and policies in their quest for economic self-sufficiency.

African American self-sufficiency and economic achievement, however, would actually help create a more productive economy for all and also make people less dependent on the state and taxpayer dollars for assistance.

But we really can’t begin to explore the ways variations of white supremacist ideology work against the interests and well-being of the majority of Americans if we don’t expand our political and social discourse beyond the making of judgments.

Our media shouldn’t be spinning wheels debating who is a racist; it needs to be engaged in educating Americans about the meaning and consequences of political positions and policies, helping them understand the dynamics off our society, and helping them think about their interests as well as the overall public good in sophisticated and rounded ways.