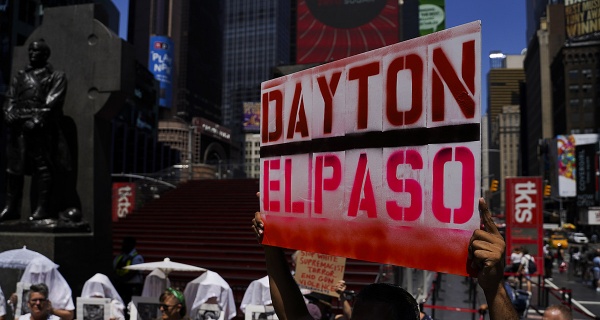 It’s well known by now that Republicans and their propaganda network, Fox News, go out of their way to blame anything and everything other than guns for gun violence. But since President Donald Trump has taken office, they’ve added another layer to their denial and deflection agenda — they blame anything and everything except white nationalism for violence committed by white nationalists.

So, following the mass shooting at a Walmart in El Paso, Texas, GOP House Minority Leader Kevin McCarthy, Texas Lt. Governor Dan Patrick and Fox News hosts chose to ignore some of the obvious motivations — the shooter shared a white nationalist manifesto minutes before the shooting — and the weapon used by the El Paso gunman and instead discussed an oft-cited cause for violence that has been widely disproven: video games.

Patrick not only made the connection between yesterday’s violence and video games, he called on the federal government to take action against the industry.

Patrick said, “How long are we going to ignore on federal level the video game industry?…I see a video game industry that teaches young people to kill… There have been studies that say it impacts people and studies that says it does not.” But in 2018, The New York Times reported that researchers found no connection to video games and mass shootings. And Psychology Today published a piece just last month citing several studies that have concluded the same.

Next up was McCarthy, whose usual word salad was in full effect, and with the help of Fox News host Maria Bartiromo, McCarthy agreed with the lieutenant governor’s take on where the fault for the shootings may lie.

“This may be a place where we could find this ahead of time,” McCarthy said. “The idea that these video games that dehumanize individuals to have a game of shooting individuals, I’ve always felt that it’s a problem for future generations and others. We’ve watched studies show what it does to individuals, and you look at these photos of how it took place, you can see the actions within video games and others.”

On Saturday, Fox News hosts and guests kicked off the video games blame that continued into Sunday.

Also, in the midst of breaking El Paso news on Saturday, Fox News went ahead with speculation that “ISIS” and, of course, border security may have something to do with the shooting.

And Texas Republican Governor Greg Abbott, during a press conference after the shooting, didn’t blame video games but instead pointed the finger at mental illness, despite no evidence that the shooter was mentally ill and research that established no link between mental health and gun violence.

“Perhaps the most profound and agreed-upon issue that came out of [recent legislative hearings on school shootings was the] need for the state and for society to do a better job of dealing with challenging mental health-based issues,” Abbott said, adding, “Bottom line is, mental health is a large contributor to any type of violence or shooting violence. And the state of Texas this past session, passed a lot of legislation that provided funding for the state to better address that challenge.”

Acting White House Chief of Staff Mick Mulvaney continued Abbott’s messaging on ABC’s This Week, saying that the El Paso shooter and others are “sick, sick people” and dodging the assertion that the president has not taken the problem of white nationalism seriously. Host Jon Karl even quoted the president, saying, “[Trump] was asked directly, do you see today white nationalism as a rising threat around the world? His answer, ‘I don’t really. I think it’s a small group of people that have a very, very serious problem.'”

“This is a serious problem. There’s no question about it,” Mulvaney replied, but then he conflated white nationalism and white supremacy with mental illness, “But they are sick, sick people. And the president knows that. Again, Jon, I don’t think it’s fair to try and lay this at the feet of the president… I don’t think it’s at all fair to sit here and say that he doesn’t think that white nationalism is bad for the nation. These are sick people. You cannot be a white supremacist and be normal in the head. These are sick people.”

It’s all an attempt to confuse the issue so that Americans don’t focus on the nearly unfettered access to guns in this country that is one of the real causes of these shootings. In fact, researchers at the University of Texas Medical Branch at Galveston, Abbott’s own state, found no link between mental illness and gun violence.

But don’t expect to hear any of this study’s findings or recommendations coming from Republicans or Fox News any time soon. Instead, they’ll be busy finding anything else to blame.