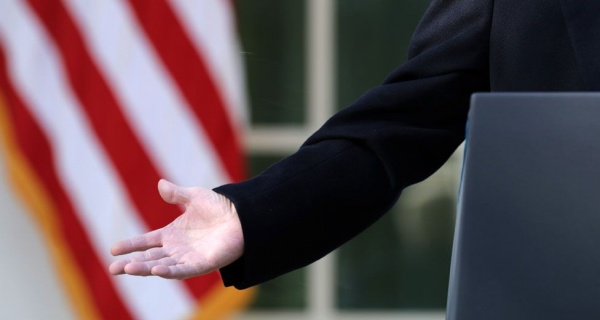 I often learn about President Trump doing or saying something bigoted before I’ve had a chance shake the cobwebs loose, as my father’s expression goes. Thanks to my phone alerts and my cursed curiosity about the news, I have to swallow some newly reported cruelty before I have brushed my teeth or have had a glass of water. What is old is often still old, often a regurgitated version of some former divisive strategy Trump has employed as far back as his old housing discrimination and Central Park Five ad days. He rarely changes what has worked since the 1970s, since it seems to resonate both with Republican Party sycophants and his entranced supporters. Racism doesn’t really have seasons.

It may be easy for some to digest, but not for me. There is no getting used to this when you are in the crosshairs of this policy, when people who look like you sit patronized by a president who tells them all the time about how he got a few more of us some jobs and few more of us out of jail, then acts as though we should be satisfied with that. “What do we have to lose?” he asks, while we sit in this systematically racist America. “Why do we hate America?” he wonders aloud, as we criticize his administration for working consciously to exacerbate inequities in everything from health care to education to housing. “Why don’t we want safety and security?” Trump proclaims, as we see his government treat migrants (the ones who survive) like literal vermin while comparing our communities to “infestations.” Again, there is no getting used to this.

A white-nationalist presidency is untenable. Having to endure one while the man in the office has committed obvious crimes, such as obstruction of justice, is even worse. Add on the ever-increasing threat of white-supremacist domestic terrorism — which the FBI director warned about just last week and the administration’s anti-immigrant policies and rhetoric fuels like gasoline — and it is impossible not to conclude that the presidency is too powerful for someone as racist as Donald Trump.

Saturday’s attack on Elijah Cummings may seem like a small example, just another episode in his reality show, but it was actually a demonstration of how grossly his power can be misused. The president reminded us that we are governed in part by a cable channel. He tweeted what Media Matters researcher Matthew Gertz called a “straight recitation” of a Fox segment comparing the supposed lack of cleanliness of Cummings’ 7th Congressional District — which covers West Baltimore, has a mix of mostly urban and suburban areas, and is 53 percent black — to the inhumane conditions ongoing at Border Patrol detention facilities, conditions about which the House Oversight chairman berated acting Homeland Security head Kevin McAleenan at a July 18 hearing.

Being a propaganda operation for the president, Fox naturally depicted the city as a decrepit, rodent-ridden ghetto, all caused by the neglect of Democrats. Both Trump and disciples like Kimberly Klacik, a Baltimore-based black Republican, continued through the weekend, posting selectively edited videos of filthy areas of the city and accusing Cummings of neglecting his district in favor of overzealous oversight of the White House.

Prideful Baltimore residents rebutted with hashtags, statistics, and beautiful imagery of their city that belied the president’s slander. Reminders of Jared Kushner’s history as a slumlord in the city flooded social media. CNN anchor Victor Blackwell, who is African American, nearly broke down in tears live on the air defending his hometown. Bristling in particular at Trump’s insistence that “no human being would want to live there,” Blackwell said, “People get up and go to work there. They care for their families there. They love their children who pledge allegiance to the flag just like people who live in districts of congressmen who support you, sir.” He concluded, “They are Americans, too.”

I admired Blackwell’s strength in that moment, even if I thought his effort and that of his fellow Baltimoreans may have been somewhat quixotic. He would never prove his point to Trump, but his tears did not signify weakness. It was a humanity confronting the lack thereof. We have laughed to keep from crying during this entire Trump administration, and sometimes we just cannot do it anymore.

Since taking over the House, the Democrats have not sat idly, passing several bills that have signified where they stand as a party. However, the semantic Twister the House Judiciary chairman Jerry Nadler is playing right now in order to avoid simply launching an impeachment inquiry when the number of House members in favor of one is now in triple digits is an insult to African American voters in particular, the Democrats’ most faithful and consistent constituency.

It is a slap in the face to see a president this criminal and this racist treated called as much by Democrats who won’t do anything about it, all to ensure that they save their own majority.

Yes, it matters that the Republicans not hold both chambers should Trump be re-appointed president by voters (and whatever foreign actors assist him in his election effort). But if not to take action at a time like this, what are we electing Democrats for?

The president’s attack on Cummings should light a fire, at the very least, every African American voter ahead of the August recess. They should be flooding town halls to not only press for the president’s impeachment, but to impress upon each House member whom they visit the urgency of the true emergency at hand. Not their power, but our communities. Not their pragmatism, but our reality.

Mitch McConnell and the Senate Republicans will never allow a conviction, I know. However, the other main Democratic arguments against impeachment are bunk: the effort against Richard Nixon united the country, they currently enjoy sufficient public support, and they can do all the business that the people require in Congress while putting Trump on trial for the crimes that they crow on Twitter all day that he committed. Again, what was the point of bringing Robert Mueller to testify before the American people if you weren’t going to do a single thing with his report other than tell us to go vote our conscience once we read it? What if we live in a state where Republicans take that vote away? What if Trump does something else even more disastrous before the election that makes all of this moot? And don’t tell me that it isn’t possible, because, please.

One of the high crimes and misdemeanors listed in the Constitution is “dereliction of duty.” In his attack on Cummings, the president made it clear that, in violation of his oath of office, he doesn’t want to be the president of Baltimore. Nor, one can presume, would he be the president of any urban area that was populated by people who didn’t vote primarily for him. He said much the same of Ferguson, Missouri, in a state he won by nearly 20 percentage points, before he won the 2016 election — calling it one of the most dangerous cities in the world, which would include war-torn parts of Syria and Afghanistan. This is what Trump thought of our America then. Any reason to believe, after these Baltimore remarks, that he has changed his mind?

When Blackwell spoke of “Americans,” it was difficult not to consider the fluidity of that word with regards to black and brown people over the history of this republic — or even since Trump has taken office. Our citizenship has always been subject to debate, and that is why Jim Crow horrors echo through today’s Trump migration policy as much as the history of concentration camps. And we should understand, going forward, that when Trump refers to America, the aspiring authoritarian is talking about himself. When he recently attacked the “Squad,” four first-year progressive Congresswomen of color, with racist barbs about their supposed lack of patriotism, he just meant that they weren’t pledging allegiance to him. Trump’s remarks about Baltimore showed that he hates the true America more than any of those four ever did.

Racism serves the purpose, for many black people and other marginalized populations he targets, that author Toni Morrison referenced in her noted 1975 speech at Portland State. “It’s important to know who the real enemy is and to know the very serious function of racism, which is a distraction,” she said then. “It keeps you from doing YOUR WORK. It keeps you explaining over and over your reason for being.” Much like Blackwell’s message on CNN, we are constantly having to justify our existence in the country that is our home.

Keep in mind, that isn’t a message to white people. That isn’t a message to white reporters, white news producers, white editors, white anchors, white politicians, white policy directors, white columnists, white radio hosts, white business owners, white donors, nor even to white allies. None of them have much of a reason to be sidetracked by the racism that Trump or anyone else spits out, whether at Cummings last Saturday in a series or tweets or anyone else. The president’s racism is not some story that fades from the news as quickly as a tweet disappears from a timeline. It is a national emergency that has resonates through municipal water systems and online chat rooms, through hospital emergency rooms and classrooms that have no heat in the wintertime. We have enough problems with presidents who are merely unwilling to do anything about racism, let alone those pursuing an active platform of white supremacy.

Look at Baltimore alone. By virtue of Trump’s political disagreement with one person, he is effectively blocking an entire city from federal representation and — if you note what he wrote in his tweet — possibly federal aid. Trump has, in effect, blackballed an American city. How is that not the only thing Democrats are talking about?

It isn’t like impeachment wouldn’t be to Democrats’ benefit. The president is clearly losing it over this, tweeting at Al Sharpton on Monday morning that he “Hates Whites and Cops!” merely for announcing that he is going to Baltimore. But Trump has always hated the idea of an uppity Negro, and for that reason may even still be angry with Cummings for daring to give him the business two years ago during a private meeting — and it might be why he was so eager to hit him the way that he did now. “Most black people are doing pretty good. We have people struggling to make ends meet, but that’s insulting,” Cummings told Trump in March of 2017, per reporter Peter Nicholas. “Probably nobody has ever told you that.” “You’re right,” the president reportedly responded, “nobody has ever told me that.” Cummings correctly assessed in January of 2018, post-Charlottesville, that “I don’t think it made any difference.”

The truly sad thing is that Baltimore could use the help. It suffers from an underinvestment in city resources across the board, had a heating crisis in its schools last winter, and has a police department under federal oversight. For all these “infrastructure weeks” Trump keeps staging and false promises he keeps making, local leaders like Baltimore city council president Brandon Scott continue to reach and fight for their city to get federal resources, even from a president that now appears bent on using Baltimore as electoral cannon fodder. After all, it was Trump who just four years ago, retweeted one of his followers who’d asked during the Freddie Gray unrest, “Can we drop @realDonaldTrump off in the middle of #Baltimore so he can show Obama how it’s done?” The then-reality star and bankruptcy veteran responded: “I would fix it fast!”