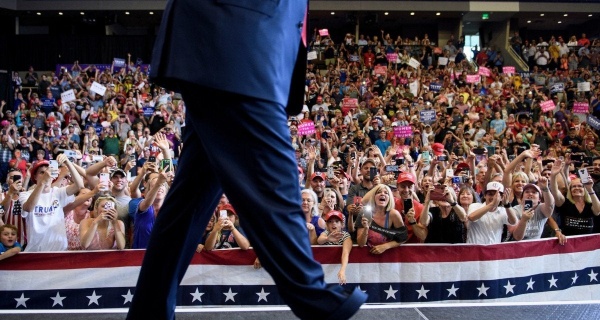 President Donald Trump caused a national fury when he tweeted that Reps. Alexandria Ocasio-Cortez (D-NY), Rashida Tlaib (D-MI), Ilhan Omar (D-MN), and Ayanna Pressley (D-MA) should “go back” where they came from — a fury that grew more intense after Trump supporters chanted “Send her back!” at a rally in Greenville, North Carolina.

Even though Trump initially tried to backtrack from that incident, Toluse Olorunnipa and Ashley Parker of the Washington Post reports that the president’s campaign is now all in on racism as the key to give Trump another four years.

“Publicly, campaign aides and advisers have sought to shift the conversation away from race and toward the less explosive territory of ideology. But they have also pushed back aggressively against charges of racism, seeking to make common cause with supporters who also feel they are too quickly branded as bigots,” they wrote. They also quoted Bryan Lanza, a former Trump 2016 transition team member, who said “Usually, when they are faced with charges of racism, Republicans hide a little bit. And the president’s not hiding. And I think that’s what the Republican voters like about him.”

Other political analysts are skeptical, though.

“We can’t really know for sure from our data whether the white grievance rhetoric is going to mobilize more support for Trump in 2020,” said Tufts University political science professor Brian Schaffner, who noted that the 2016 exit polls do not clearly show whether racial rhetoric actively improves Trump’s numbers with non-college white voters. “And it’s very possible that he may mobilize just as many — or maybe even more? — opponents with this rhetoric.” Meanwhile, polls suggest an overwhelming majority of Americans consider Trump’s rhetoric offensive.

But given that Trump has never faced true consequences for such behavior, it seems unlikely he will abandon this approach any time soon.