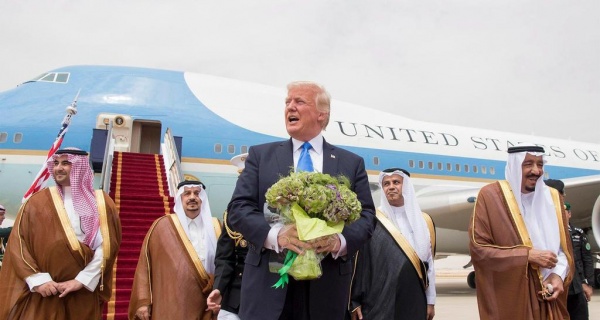 Donald Trump vetoed three congressional bills Wednesday aimed at stopping more than $8 billion in arms sales to Saudi Arabia and the United Arab Emirates, the latest favor by a commander in chief who has made a point of lavishing praise on the Saudi kingdom while avoiding public criticism.

From his earliest days in office, Trump has cultivated Saudi Arabia and placed it at the center of his foreign policy in the Middle East, lauding Riyadh's stance against Iran and its appetite for U.S.-made weapons.

Trump and his deputies have defended the approach as a course correction after former president Barack Obama's diplomatic overtures to Iran and other policies that they say alienated the Saudis and other Sunni Arab allies.

"They have been a great ally in our very important fight against Iran," Trump said in a Nov. 20, 2018, statement, not long after the CIA concluded Saudi writer Jamal Khashoggi, a critic of the Saudi government, had been killed in Istanbul on the orders of Saudi Crown Prince Mohammed bin Salman.

But Trump has faced withering criticism over his red-carpet treatment of Saudi Arabia, even among some prominent Republican supporters, including Sen. Lindsey Graham of South Carolina.

Critics say Trump has given the Saudis — and its crown prince in particular — a blank check and failed to hold the kingdom accountable for Khashoggi's murder, for an air war in Yemen that has allegedly killed thousands of civilians, and for other human rights abuses.

Here is a list of 11 Trump administration actions that have favored Saudi Arabia:

In May 2017, Trump picks Riyadh for his first trip abroad since entering office, an unprecedented move for a newly elected president. The Saudis give him a regal welcome, awarding Trump a medal, announcing plans for arms and business deals and inviting the president to take part in a traditional sword dance.

2. Trump praises a blockade on Qatar

Shortly after Trump's visit to Riyadh, Saudi Arabia, the United Arab Emirates, Bahrain and Egypt impose a blockade on Qatar. Trump praises the move in a tweet June 6, 2017, contradicting officials in his own administration who had called for calm and compromise: "During my recent trip to the Middle East I stated that there can no longer be funding of Radical Ideology. Leaders pointed to Qatar — look!" Then Secretary of State Rex Tillerson and Defense Secretary James Mattis are blindsided by the blockade.

The Trump administration notifies Congress in June 2017 that it plans to resume sales of precision-guided bombs to Saudi Arabia that were suspended by Obama over concerns about civilian deaths from Saudi-led coalition airstrikes in Yemen.

4. Trump welcomes the crackdown in Riyadh

After the crown prince detains hundreds of top businessmen, officials and members of the royal family at the Ritz-Carlton hotel in November 2017 and demands payment for alleged corruption, Trump praises the crackdown.

"I have great confidence in King Salman and the Crown Prince of Saudi Arabia, they know exactly what they are doing. Some of those they are harshly treating have been 'milking' their country for years!" Trump says in a tweet two days after the crackdown came to light.

In response to a congressional deadline in September 2018, Secretary of State Mike Pompeo certifies the Saudis are abiding by the laws of war in Yemen and are allowing humanitarian access despite allegations from rights groups and objections from State Department officials.

The Oct. 2, 2018, killing of Khashoggi, a Washington Post columnist, at the Saudi consulate in Istanbul sparks international outrage.

"Our intelligence agencies continue to assess all information, but it could very well be that the Crown Prince had knowledge of this tragic event — maybe he did and maybe he didn't!

"That being said, we may never know all of the facts surrounding the murder of Mr. Jamal Khashoggi. In any case, our relationship is with the Kingdom of Saudi Arabia."

In an interview with NBC's Chuck Todd on "Meet the Press" that aired June 23, Trump renews his defense of Saudi Arabia as an important arms customer and dismisses the findings of a U.N. report calling for a full investigation of Khashoggi's killing.

The administration acknowledges approving the transfer of sensitive nuclear technology to Saudi Arabia in two cases after Khashoggi's murder — on Oct. 18, 2018 — 16 days after Khashoggi's death — and Feb. 18. (Democratic Sen. Tim Kaine of Virginia releases the information from the Department of Energy on June 4).

The transfers coincide with talks on a possible nuclear cooperation agreement with Riyadh. Energy Secretary Rick Perry at a hearing in March 2018 had sidestepped questions as to whether the administration would enter into agreement without the so-called "gold standard" prohibitions on enriching uranium and reprocessing plutonium.

In December 2018, the Trump administration threatens to veto a resolution drafted by Britain demanding accountability for war crimes in the Yemen conflict and for Saudi Arabia and other states to ensure unfettered access for shipments of food and medicine to ports in Yemen. A resolution with watered-down language is eventually adopted.

Trump vetoes a bipartisan congressional resolution April 16 demanding the end of U.S. military support for the Saudi-led war in Yemen. The resolution marks the first time both chambers of Congress passed a bill using its War Powers authority to restrict the president's ability to deploy troops into battle.

On June 20, Pompeo chooses not to include Saudi Arabia on an annual blacklist of countries recruiting child soldiers in battle, despite recommendations from officials inside the State Department.

President Trump blocks three congressional bills that would have stopped more than $8 billion in arms sales to Saudi Arabia, the U.A.E. and Jordan, including precision-guided bombs for Riyadh.