Pardoned By Trump, Joe Arpaio Is Considering A Run For His Old Gig 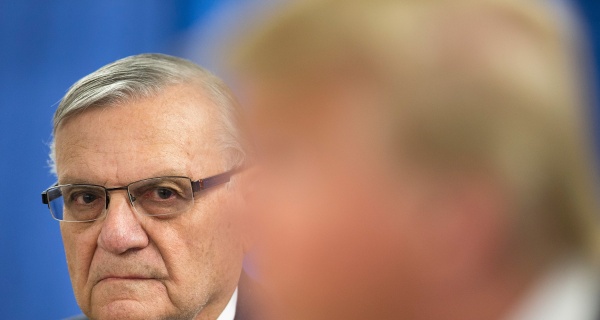 Former Maricopa County sheriff and controversial conservative firebrand Joe Arpaio said he's "strongly" considering running for his old position in 2020 as tensions rise over the treatment of migrants detained on the U.S.-Mexico border.

"I'm very strongly thinking about it, very strongly considering it," Arpaio told ABC News in response to a question about the 2020 elections. "I'll decide next month, and I always have a flare for these sorts of things."

President Donald Trump pardoned Arpaio in 2017 for his conviction on criminal contempt of a federal court order that he stop detaining people based on their immigration status. Arpaio's long record also included housing some prisoners in an outdoor "tent city" where temperatures reached the triple digits and using so-called "chain gangs."

Arpaio, 87, told ABC News he met privately with Trump a few months ago but would not say what he discussed. The White House did not respond to a request for comment.

The former sheriff had been teasing an announcement on social media after billboards popped up in Phoenix hinting at a possible 2020 sheriff run for Arpaio, although he denies having any involvement in billboards.

If he were to run, Arpaio said he'd campaign on his continued false allegations that President Barack Obama's birth certificate is fraudulent.

"I'm not a politician who worries about talking about things because they may lose a few votes. I brought it up in my last election and I'm not going to stop. Why would I stop?" Arpaio said.

Arpaio's potential 2020 run could raise complications for Trump, who rose to political prominence in part by joining Arpaio and several other fringe theorists in making false allegations regarding Obama's birth certificate as part of the "birther" conspiracy movement.

In recent years, however, the president has attempted to publicly distance himself from the conspiracy theory he had long championed. In September 2016, then-Republican presidential nominee Trump acknowledged for the first time that Obama was born in the United States -- five years after the former president released his long-form birth certificate.

Still, The New York Times reported in late 2017 that he was still questioning its authenticity behind closed doors, and Arpaio told ABC he doubts Trump has fully reversed course after years of calling former President Obama's birth certificate into question, saying he "never heard him come out and say it's not fake."

In 2018, the former sheriff ran in the Republican primary for the Senate seat being vacated by former Arizona Sen. Jeff Flake and came in third. In that vote, Arpaio lost big in the county where he served as sheriff for 24 years.

Madrid says the former sheriff's chances in the next election wouldn't be any better than his failed Senate run.

"He's not bringing anything different. He's singing the same old song that didn't sell four years ago, and over those four years the demographics have gotten worse for his chances," Madrid said.

Arpaio's campaign consideration also comes amid debate over the administration's policies of detaining migrants, promises of expanded ICE raids on undocumented immigrants and thorny issues of race as Trump continues to ramp up attacks aimed at four congresswomen of color — telling the lawmakers in a tweet last week that they should "go back and help fix the totally broken and crime-infested places from which they came."

The tweets led to supporters at the president's campaign rally in North Carolina chanting "send her back," referring to Rep. Ilhan Omar of Minnesota, who came to the U.S. as a refugee as a child and is an American citizen. The other three congresswomen were born in the U.S.

Arpaio defended the president's attacks in a bizarre fashion — arguing that Trump must have meant the congresswomen should join the Peace Corps, despite the president not mentioning the organization anywhere in his original or subsequent comments on the issue.

"I'm sure the president was probably saying go back there," Arpaio said. "I can't speak for him. But I'm sure not going to criticize him."

The former sheriff also said he believes running for office at the same time as Trump's reelection campaign would give him a significant boost.

"One deciding factor thing would be is Trump and I will be running again together, just like 2016 but now in 2020," Arpaio said.

Arpaio served as sheriff in Maricopa County, Arizona, from 1993 to 2016 and garnered national attention for his hard-line positions and controversial punishments for prisoners, including opening the outdoor jail known as Tent City, in which the male prisoners were forced to wear all pink clothing. In 2013, a U.S. District Court judge ruled the county's actions to be discriminatory and in violation of the Civil Rights Act, which ultimately led to a contempt charge when Arpaio's office refused to yield on its conduct.

Arpaio was an early supporter of the president, introducing Trump at campaign rallies in Arizona throughout the 2016 election. However, the 2020 campaign has yet to reach out for his services this time around, according to the former sheriff.