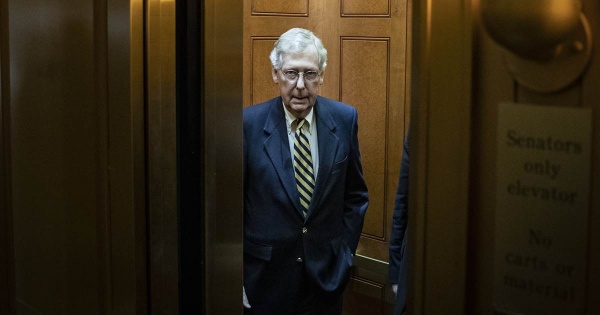 McConnell said he wouldn't allow a vote on the bills because they were "so partisan," but, as previously reported, earlier this year McConnell received a slew of donations from four of the top voting machine lobbyists in the country.

"Clearly this request is not a serious effort to make a law. Clearly something so partisan that it only received one single solitary Republican vote in the House is not going to travel through the Senate by unanimous consent," said McConnell on the Senate floor.

The plans would likely burden the two largest electronic voting machine vendors in the United States, Election Systems & Software and Dominion Voting Systems, with new regulations and financial burdens. Together, the companies make up about 80 percent of all voting machines used in the country and both have far-reaching lobbying arms in Washington D.C. Many of those lobbyists have contributed to the McConnell campaign, reported Sludge last month, an investigative outlet that focuses on money in politics.

Sludge found that Brownstein Hyatt Farber Schreck lobbyist David Cohen, who has worked on behalf of Dominion Voting Systems this year, donated $2,000 to McConnell during this time. Brian Wild, who works with Cohen and has also lobbied Dominion, gave McConnell $1,000.

Around the same time, on February 19 and March 4 Emily Kirlin and Jen Olson, who have lobbied on behalf of Election Systems & Software over the last year donated $1,000 to McConnell each.

Thursday's first bill, presented by Senate Minority Leader Chuck Schumer would authorize $775 million to bolster election security and require states to keep paper trails of all votes cast. The second, presented by Senator Richard Blumenthal, would require political candidates and their staff and family members to notify the FBI about any offers of assistance from foreign governments.

"It's not surprising to me that Mitch McConnell is receiving these campaign contributions," the Brennan Center for Justice's Lawrence Norden told Sludge last month. "He seems single-handedly to be standing in the way of anything passing in Congress around election security, and that includes things that the vendors might want, like money for the states to replace antiquated equipment."

McConnell's actions seemed even more out of balance with his party, as the Senate Intelligence Committee?—led by Republicans?—released a report later on Thursday claiming Russians have targeted voting systems in all 50 states in 2016. Though there was no evidence votes were changed, in Illinois "Russian cyberactors were in a position to delete or change voter data."

In 2018, there were 14 states that used electronic voting systems in 2018 with no paper trail, that means that if votes were inaccurately tallied or machines malfunctioned, there would be no way to investigate or recover those votes. Voting machine companies are not currently subject to any federally-mandated security standards.