While Talking About AOC Trump Made The Controversial 'Ok' Hand Gesture 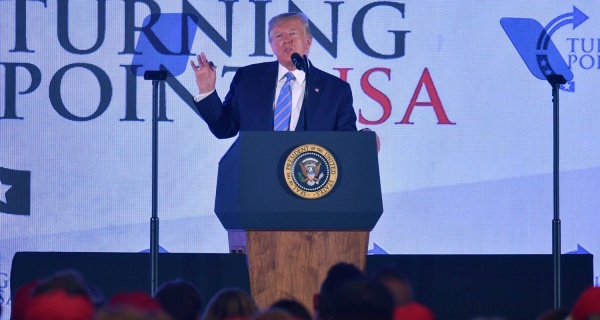 While referring to New York Congresswoman Alexandria Ocasio-Cortez in a speech on Tuesday, President Trump flashed a distinctive hand gesture. Here’s a video, captured and shared on Twitter by Vox reporter Aaron Rupar.

The gesture is traditionally the symbol for “okay,” but, mutated by a wildly successful 4chan hoax and stripped of its irony by white supremacists, it’s now also used as an earnest “white power” symbol.

So when does it mean what? As the Anti-Defamation League writes in an explainer, “The overwhelming usage of the ‘okay’ hand gesture today is still its traditional purpose as a gesture signifying assent or approval. As a result, someone who uses the symbol cannot be assumed to be using the symbol in either a trolling or, especially, white supremacist context unless other contextual evidence exists to support the contention.”

So let’s evaluate the context here, shall we?

Two months ago, the leader of Turning Point USA’s chapter at the University of Nevada, Las Vegas was filmed flashing the same hand gesture, while saying “White Power.” (Turning Point USA severed ties with the student after the video went viral, saying it has “a zero-tolerance policy for hate.”) At the start of his speech, Trump gave a shout out to Turning Point’s founder, Charlie Kirk, who has been photographed flashing the gesture alongside a Trump poster.

And, second, the subject: Rep. Alexandria Ocasio-Cortez. Ocasio-Cortez is one of the four Congresswomen the president recently said should “go back to their countries,” remarks were officially condemned by the House of Representatives as racist.

So, was Trump simply making a gesture signifying assent or approval?

You’ll have to be the judge; the White House did not respond to a request for comment.