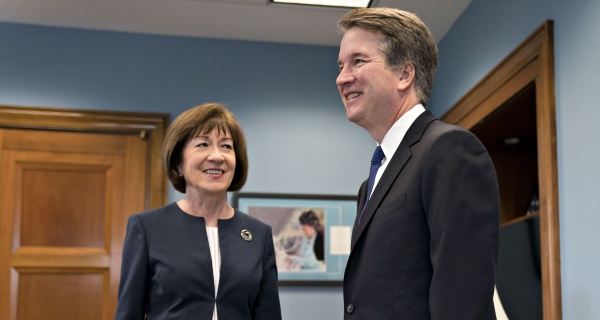 Things are not looking good for Sen. Susan Collins (R-ME), who is up for reelection in 2020.

Collins has made a series of votes that are far more conservative than the people in her home state. Collins is one of very few Republicans willing to say that she is pro-choice. Planned Parenthood eve awarded her with an ally award.

When she met with Judge Brett Kavanaugh, however, she said that he believed Roe v. Wade was the law of the land, making her believe that he would never act to undermine it. Then Kavanaugh ruled to allow such strict abortion laws in Louisiana that it would leave just one clinic left for the entire state.

Collins has always painted herself as an independent thinker who doesn’t belong squarely in one party or another. Those days have ended. Collins now votes with Trump nearly 70 percent of the time. She opposed sending humanitarian aid to the U.S.-Mexico border. She endorsed oil industry lobbyist David Bernhardt to serve as the new Secretary of the Interior.

Collins also voted to confirm Attorney General Bill Barr, who ultimately lied to Americans about what special counsel Robert Mueller’s report revealed. Now she’s desperately trying to lobby him not to destroy the Affordable Care Act, which will likely fail because the president wants to end the ACA.

Bloomberg reporter Steven Dennis said that about 4 years ago in Morning Consult polling, Collins was the second most popular senator among all 100. Her approval rating was around 78 percent and only 16 percent disapproved of her in Maine. Today, everything has changed, and Collins has plummeted to 45 percent or 48 percent, depending on which poll you believe. Dennis explained that no senator in the United States has seen his or her standing drop more than Collins.

Hillary Clinton carried the state 48 percent to Trump’s 45 percent in 2016.