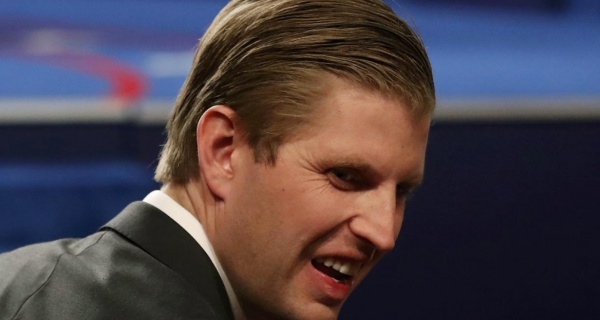 One of the great debates of the Trump era is which of the president‘s adult sons is dumber: Eric or Don Jr. While the Trump boys have not made the answer easy, jostling for the title on a daily basis, Eric put in a massive effort to pull ahead on Wednesday, when he claimed that almost the entire country—that is, including the half that hates his father‘s guts—think the president’s racist attacks on a group of freshman congresswomen were justified.

Appearing on Fox & Friends to discuss his dad‘s multiday tirade, Eric argued, as the president and his allies have, that Papa Trump was simply standing up for America when he told four women of color to “go back” to the countries they “originally came from” and quit their bitching about putting children in cages. “No one’s been fighting for American pride,” Eric said. “And standing up for the national anthem and standing up for our flag. And not allowing our flag to be burned in the streets. No one’s been fighting for these things. My father is in there and he is fighting every single day. He has to fight against the media, he has to fight against these lunatics, and guys, I’m telling you, 95% of this country is behind him in this.”

In a sign of just how ridiculous this statement was, even the Fox & Friends gang, not typically known for getting anything right, had to correct young Eric, interjecting to note that while Trump “certainly” has support among Republicans, his approval rating “did drop with independents.” In fact:

A clear majority of Americans say President Trump's tweets targeting four minority congresswomen were “un-American,” according to a new USA TODAY/Ipsos Poll. But most Republicans say they agreed with his comments, an illustration of the nation's sharp partisan divide on issues of patriotism and race. More than two-thirds of those aware of the controversy, 68%, called Trump's tweets offensive.

While 57% of Republicans said they agreed with the tweets, that’s a far cry from “95& of the country.” Numbers are hard!