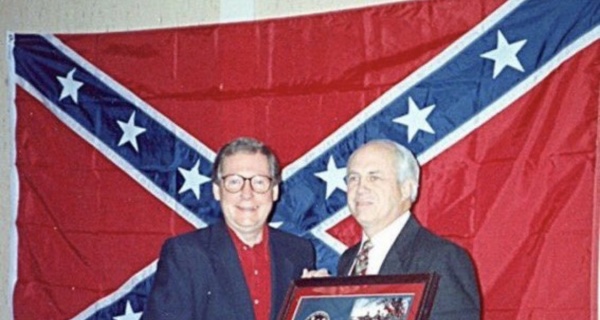 A picture of Republican senator Mitch McConnell posing with a Confederate battle flag has resurfaced after he refused to say Donald Trump’s tweets attacking four Democratic congresswomen were racist.

Trump recently attacked four congresswomen of color, who are all US citizens, on Twitter by telling them to “go back” to “the totally broken and crime-infested places from which they came”.

When asked if Trump’s comments were racist, McConnell told reporters:

But McConnell, who is the Senate majority leader, does not have the best record when it comes to judging what is, or isn’t, racist.

Critics of the senator have pointed to a photograph, reportedly taken in the early 1990s at a Sons of Confederate Veterans event, that shows McConnell receiving an award in front of the Confederate flag.

Displaying the Confederate flag is controversial in the US, due to its associations with racism, slavery and segregation.

Although some people in the South argue that the flag is a symbol of Southern pride, others argue it is impossible to separate the flag from its association with slavery and white supremacy.

McConnell even released a statement in 2015 saying he believed states should no longer fly the flag.

"The Confederate Battle Flag means different things to different people, but the fact that it continues to be a painful reminder of racial oppression to many suggests to me at least that it's time to move beyond it, and that the time for a state to fly it has long since passed. There should be no confusion in anyone's mind that as a people we're united in our determination to put that part of our history behind us".

A spokesperson for the senator also suggested earlier this year that he would not pose for a similar photo today.

At the press conference about Trump’s tweets, McConnell was also asked about his wife, secretary of transportation Elaine Chao, who immigrated to the US from Taiwan when she was eight years old.

When asked by a journalist if he would consider it a racist attack for someone to tell Chao to “go back to her country”, McConnell failed to answer the question directly.