Mitch McConnell's Actions Against America's Democracy Has Been Devastating 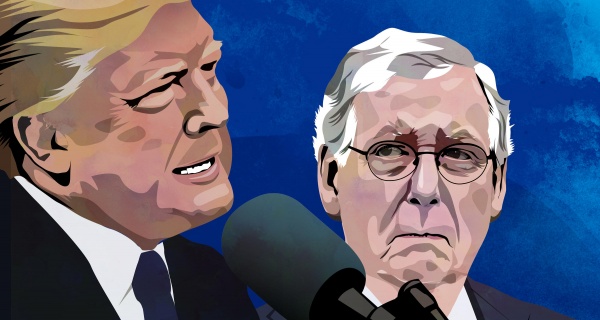 The most powerful politician in Washington will be up for reelection next year. No, we’re not talking about Donald Trump. We’re talking about the man who makes sure Trump gets whatever he wants.

As the Senate majority leader, Mitch McConnell has been among Trump’s most adept enablers. Without McConnell, Trump’s first three years in office would have been indisputably deemed a colossal failure. In fact, the president might have been impeached by now.

It should come as no surprise that Democrats have set their sights on McConnell for defeat in 2020. It is a mighty mission, requiring the precision of skilled combatant who knows what it’s like to go to war.

For this job, they have chosen a fighter pilot — 44-year-old retired Marine Lt. Col. Amy McGrath. During her 20 years in the Marine Corps, she became the first female to fly an F/A-18 combat jet on a mission. Her resume is impressively heroic, having dropped bombs on al-Qaida and the Taliban in Afghanistan and Iraq.

No question about it, McGrath is a kick-butt contender. But in solidly red Kentucky, the state that has sent McConnell to Washington for six terms, even someone as tough as McGrath might not be able to stop him from winning a seventh.

So as the rest of us in America sit back, relaxing in our recliners, some might wonder why anyone should spend a moment of their time worrying about what voters in Kentucky might do. Unfortunately, McConnell doesn’t only affect Kentucky. As the Senate majority leader, he’s America’s problem.

Let’s consider what McConnell has done for our country. He has single-handedly stopped Democrats in their tracks, dashing the hopes of any bipartisan resolutions to important issues such as immigration, health care reform and climate change. And he has abused that power consistently.

He has made a career of advancing political partisanship, and he is, perhaps more than anyone else, responsible for creating and sustaining the current environment of extreme polarization that cuddles Trump in its bosom.

McConnell takes pride in labels like the “Grim Reaper” and "Darth Vader,” which he has bestowed on himself for stubbornly refusing to move any legislation from the Democratic-controlled House to the Senate floor. In doing so, he has protected Trump from having to make the politically damaging move of vetoing popular legislation if it happened to somehow make it to his desk.

If you live in this country, and you are not a wealthy white, conservative male, McConnell has made it clear that he is out to get you. He has targeted you for extinction, and he is betting on voters in Kentucky to allow him to see it through.

If you are a “Dreamer," McConnell has come for you. Before anyone in the Senate had a chance to think through recently passed House legislation offering a path to citizenship for beneficiaries of the Deferred Action for Childhood Arrivals program, McConnell announced that the bill likely would never come up for a vote.

If you are a registered voter who believes in free and fair elections, McConnell has come for you. He has refused to advance legislation in the Senate that would make it easier for Americans to vote. And he has adamantly opposed stricter campaign finance regulations that would put limits on big-money financing.

If you are a working woman, McConnell has come for you. He ignored the Paycheck Fairness Act approved earlier this year by the House. The bill would help close the wage gap between men and women by forcing employers to demonstrate that salaries are based on factors such as education or experience, rather than an employee’s sex.

If you are a victim of a shooting or have lost someone to gun violence, McConnell has come for you. He refuses to allow legislation mandating universal background checks for gun sales to come up for a vote in the Senate. The measure has garnered the bipartisan support from urban areas to suburbia, including survivors of the mass shooting at Marjory Stoneman Douglas High School in Parkland, Fla.

If you rely on Social Security and Medicare, McConnell surely would come for you if he thought he could get away with it.

And if you believe that no one, including the president, is above the law, McConnell is waiting for a chance to come for you too. Any move to impeach Trump for alleged obstruction of justice during the Russia probe certainly would hit a stone wall in the Senate. Even if Democrats began impeachment proceedings in the House, McConnell would undoubtedly stop a Senate trial from taking place.

If you want to know who McConnell really is, take a look at what he has done during his tenure. He had no qualms about shepherding through a tax cut that exclusively benefited the wealthy. He knows how to look out for the big-money supporters who have his back.

But his primary goal is to hold the Democratic agenda at bay. If there’s any doubt about that, consider what he told the National Journal on the eve of the 2010 midterm elections, two years into Barack Obama’s first term.

“The single most important thing we want to achieve is for President Obama to be a one-term president,” he said.

He failed at that. Getting rid of a sitting president is harder than some might think.

Many Americans find McConnell as repulsive as Trump. But getting rid of the Senate majority leader in a state that Trump carried by 30 percentage points in 2016 likely would be tougher than kicking Trump out of the White House.

Unfortunately, no one knows that better than McConnell.