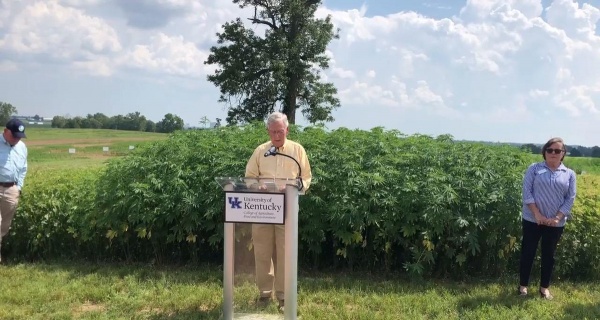 Senate Majority Leader Mitch McConnell, who said recently he opposes paying government reparations to the descendants of American slaves, has a family history deeply entwined in the issue: Two of his great-great-grandfathers were slave owners, U.S. census records show.

The two great-great-grandfathers, James McConnell and Richard Daley, owned a total of at least 14 slaves in Limestone County, Alabama — all but two of them female, according to the county “Slave Schedules” in the 1850 and 1860 censuses.

The details about McConnell’s ancestors, discovered by NBC News through a search of ancestry and census records, came in the wake of recent hearings on reparations before the House Judiciary Subcommittee on the Constitution, Civil Rights and Civil Liberties. Asked about the reparations issue, McConnell, R-Ky., said he was opposed to the idea, arguing it would be hard to figure out whom to compensate.

“I don’t think reparations for something that happened 150 years ago, when none of us currently living are responsible, is a good idea,” he said June 18, a day before the House reparations hearing. “We’ve tried to deal with our original sin of slavery by fighting a civil war, by passing landmark civil rights legislation. We’ve elected an African American president.”

NBC News, in several phone calls and emails to McConnell’s office, asked if the senator was aware that his great-great-grandfathers were slave owners. The office did not respond to those requests.

Slavery experts have stressed that descendants of slave owners should not be held personally responsible for the deeds of their forebears. But they have also argued that the families that descended from slave owners, like McConnell’s, are likely to have benefited from the labor of slaves that propped up farm families in earlier generations — a point made by many reparations supporters, who have said that descendants of slaves were never compensated for the economic benefit their forebears made to white families.

Collins’ assertion is supported by research done by two American professors and one Danish college professor, who found that the Southern slave owners were able to rebound more rapidly economically than non-slave owners after the Civil War.

“We see recovery for the sons of both small and large slaveholders, as well as in the counties that specialized in non-plantation crops,” wrote the authors of "The Intergenerational Effects Of A Large Wealth Shock: White Southerners After The Civil War,” a study published by the National Bureau of Economic Research, the nation's leading nonprofit economic research organization.

No news articles were found in which McConnell has previously spoken of his ancestors being slave owners. And in his 2016 memoir, “The Long Game,” he wrote that he was descended from “a long line of hardworking and often colorful McConnells,” but did not mention that any of them owned slaves. He did mention another James McConnell — apparently the father of the slave-owning James McConnell — who he said came from Ireland in the 1760s and fought for the colonies in the American Revolution.

As a legislator, McConnell has generally been supportive of civil rights measures, and said his parents, whom he has described as “very enlightened Southerners,” opposed the rampant segregation that surrounded his family in northern Alabama. He has said his hero is Sen. John Sherman Cooper, a Kentucky Republican who died in 1991, best known for breaking the filibuster against the 1964 Civil Rights Act that had been led by other Southern senators.

However, like most Republicans, he supported the narrowing of the Voting Rights Act by the Supreme Court in 2013, and has also been an advocate for strong voter ID laws. Both positions have been criticized by current civil rights leaders for making it more difficult for minorities to vote.

In the 1850 census, his great-great-grandfather Richard Daley owned five female slaves ranging in age from 2 to 22. Four are classified as “mulatto” — a now-offensive term for mixed-race people. Their ages were 2, 4, 18 and 20. One 22-year-old slave was identified as black. None of them are named in the document.

Little is known about the four female slaves listed in the 1860 census who were owned by another of McConnell’s great-great-grandfathers, James McConnell. They are identified in the records only by their ages, which were 1, 3, 4 and 25, and by their race — “mulatto.”

Two of those females, ages 30 and 11, were classified as mulatto, according to the records. The other woman, who was 39, was listed as black. Both males, one who was either 10 or 12 years old and one who was 7, were listed as mulatto. None are identified by name.

It appears from the records that most of the McConnell and Daley family slaves managed to run away. The 1860 census slave schedule indicates that prior to the census count, all of James McConnell’s slaves escaped, as did all but one of Daley’s slaves.

In the 1850 census, four of Daley’s five slaves were also marked as having escaped, so it appears that he acquired additional slaves between 1850 and 1860.

“There were a lot more runaways, including some gone for years, than many historians have believed,” said Gwendolyn Midlo Hall, a pioneering historian who has spent much of her life gathering records about slaves. “The enslaved in the Deep South escaped into the wilderness including swamps, by boat to Cuba or the North, Midwest and Canada, and some headed south to Mexico.”

Hall is a co-founder of “Slave Biographies: The Atlantic Database Network,” an online project that describes itself as a “database of information on the identities of enslaved people in the Atlantic World.”

Even if they had not run away, tracking down the descendants of slaves who worked the smaller holdings can be hard because record-keeping in rural places like northern Alabama was hit-or-miss, Tony Burrough, a Chicago-based African American genealogist, said.

“Identifying the descendants and finding them would be a complicated project, and what I mean by that is that it would take a lot of work, searching for all kinds of records that might include the names of the enslaved people.” Burroughs said. “It is very rare that the story of who enslaved a person gets passed down from generation to generation. There is the assumption that somebody with the same surname owned their ancestors, but that doesn’t always hold true.” In cases where better records were kept, however, it has been possible to track down the descendants of slaves.

NBC News was able to build a McConnell family tree by locating obituaries of his predecessors, by searching through online genealogical websites like Ancestry.com, and by tracking down his memoir and news articles in which the senator spoke about his relatives and his family’s deep roots in northern Alabama. In addition, members of the McConnell family have built and posted a separate online family tree, which supports the genealogical trace performed by NBC News.

These family trees do not themselves show slave ownership, but the names, dates and locations of the great-great-grandfathers match precisely with the slave ownership records in the 1850 and 1860 censuses. There was no one else with the same names as the two slave owners, James McConnell and Richard Daley, listed in the two censuses for Limestone County.

McConnell is now closely identified with Kentucky as its best-known politician, but he was born Feb. 20, 1942, in Sheffield, Alabama. Generations of his family had lived in and around Limestone County, which is west of Huntsville and just south of the Tennessee border.

From ages 5 to 8, McConnell lived in a rented bungalow in Athens, Alabama, as he has recounted. His paternal grandparents are buried in the Athens City Cemetery. And he has spoken proudly in the past about his north Alabama roots.

In a Dec. 28, 2014, interview with The News Courier, a daily newspaper published in Athens that covers Limestone County, McConnell described his ancestry in detail.

“My great-grandfather was a circuit-riding Cumberland Presbyterian minister,” the senator told the paper. “We still have his original saddle in my wife’s and my archives in Louisville.”

The senator related the same story in his memoir. “My dad’s grandfather was a circuit-riding Calvinist preacher who sermonized at a different church every Sunday, carrying his Bible in the saddlebags I still have,” he wrote.

McConnell was talking about the Rev. Samuel Porter McConnell, who lived from 1844 to 1921, and was married to Othella Daley, according to a marriage record on Ancestry.com. The minister was the son of James McConnell, the slave owner, according to Alabama death records.

Othella Daley, Sen. McConnell’s great-grandmother (whose maiden name was spelled Daily or Daly in some records) was the daughter of Richard Daley, the slave owner. She appears in an 1850 census record from Limestone County, which identifies her (under the first name Offillia) as a 1-year-old member of Daley’s household.

She and the Rev. McConnell were the parents of the senator’s grandfather, Robert McConnell, owner of the McConnell Service Funeral Home in Athens, according to death records and an April 17, 1958 obituary in the Huntsville Times.

Historians say that contemporary Americans can learn from slave owner genealogies how many families directly or indirectly benefited from the labor of generations of slaves.

“No one is seeking to judge anyone’s ancestors,” said Seth Rockman, a history professor at Brown University and co-editor of “Slavery’s Capitalism: A New History of American Economic Development.”

“The whole conversation is about the American economic system as a whole, and the degree to which the debasement of African-descended people created the structures through which other Americans were able to prosper,” he said.

Louis Cain, professor emeritus at Loyola University Chicago and an expert on the economics of slavery, said more Americans have been stained by slavery than they realize.

“I suspect with the mobility of the American population in the 20th and 21st centuries, most of us have ancestors that owned slaves, including many individuals who did not arrive until well after the Civil War,“ Cain said. “The responsibility for what happened was collective, not individual.”