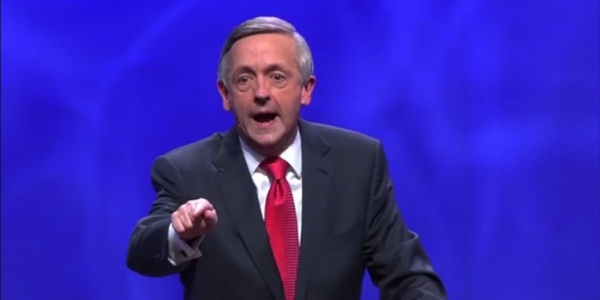 Speaking before an audience full of social conservatives and activists this weekend at the Faith & Freedom Coalition’s Road to Majority Conference at the Omni Shoreham Hotel in Washington, D.C., Dallas megachurch pastor Robert Jeffress slammed the Democratic Party for their recent hiring of a faith outreach director, saying that they’re a “Godless” party that worships an “imaginary god.”

“I am not a Republican or a Democrat so I don’t say this from a partisan perspective,” Jeffress, who is also a spiritual advisor to President Trump, said. “But the truth is that when you talk about righteousness and unrighteousness. It is becoming clearer and clearer that the Democrat Party has truly become a godless party. It is a godless party.”

Referring to the Democrats’ hiring of Union Seminary Vice President Derrick Harkins to lead the party’s 2020 faith outreach efforts, Jeffress called him a “Trump-hating pastor” who hails from a “liberal seminary that is filled with liberal professors who couldn’t find God if their life depended on it.”

“Suddenly, they are all talking about God and their personal faith in God,” Jeffress said.

While Jeffress questions the Democrats’ sincerity when it comes to faith, he’s known for characterizing Donald Trump as a devout Christian, which in and of itself is a questionable take on a man who’s exhibited behavior most people wouldn’t align with Christian values — depending on who you ask.

Just before Trump’s official kickoff of his 2020 campaign last month, Jeffress appeared on Fox News and said that the 2020 election “is not only about giving the president a second term” but is more importantly about “the survival of our nation.”

He then praised Trump’s “godly policies.”

“I don’t know any policy the president has that is non-Christian,” he said, adding that Trump is “the most pro-Christian president that we’ve had in history.”