Lindsey Graham's Challenger Has Raised $1.5 Million Since Announcing His Candidacy 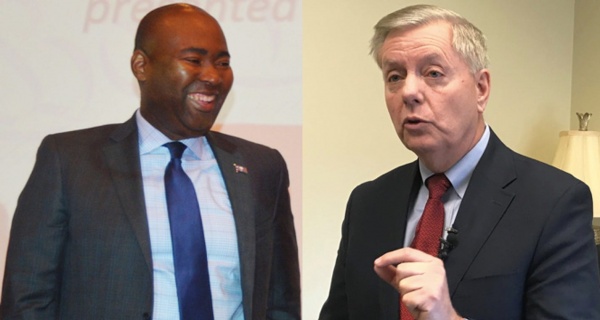 Jaime Harrison has set a new record for most money raised by a Democratic Senate challenger in South Carolina.

Democrat Jaime Harrison raised $1.5 million for his bid to challenge U.S. Sen. Lindsey Graham in the past three months, his campaign announced Tuesday, breaking the record for the most ever raised by a Democratic Senate challenger in South Carolina.

“I am inspired and humbled by the overwhelming support,” Harrison said. “Together, we’re going to win this campaign to elect a United States Senator with the courage to lower health care costs and defend our rural hospitals, protect our coasts, and create opportunity for all South Carolinians.”

About $1.3 million of Harrison’s haul came in the 33 days since he officially launched his bid, the campaign said. He had initially formed an exploratory committee. With 60,200 total contributions, including 57,100 this quarter, the average donation to Harrison has been $26, according to his campaign.

Harrison has been in the race for a little more than a month but has already raised a third of the money that Sen. Lindsey Graham had in the bank. Harrison won’t be able to out-fundraise Graham who has cozied up to Trump like an illegitimate son. Democrats should be encouraged by Harrison’s fundraising because it is a sign that they will be able to raise enough money to give Lindsey Graham a close race.

Democrats face an uphill battle in South Carolina as Graham has a net (+21) approval rating in the state, and is the Senate’s 13th most popular senator. Graham’s approval ratings have gone up since he embraced Trump, but Harrison is providing optimism for Democrats that they may finally be able to give Graham the close Senate election that he has always deserved.