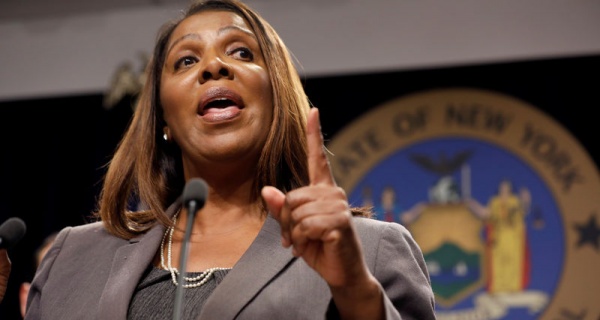 If you’re going to come for New York State’s top law enforcement officer, Attorney General Letitia James, know that she is no one’s “tool” and that you had better say her name: “Tish.”

That was the message James sent on Twitter Monday after Donald Trump took to his favorite medium to slam New York Gov. Andrew Cuomo for using “his Attorney General” as a “bludgeoning tool” to go after his and his grown children’s businesses in the state.

Donald J. Trump
?
@realDonaldTrump
It is very hard and expensive to live in New York. Governor Andrew Cuomo uses his Attorney General as a bludgeoning tool for his own purposes. They sue on everything, always in search of a crime. I even got sued on a Foundation which took Zero rent & expenses & gave away...

As Politico notes, Trump continued his rant regarding investigations into the Trump Foundation, which was forced to shut down in December 2018 after a lawsuit brought by the then New York attorney general, alleging improprieties.

But James, who took office in January, made it clear: “No one is above the law, not even the President.” And she reminded Trump that she has a name: “P.S. My name is Letitia James. (You can call me Tish.)”

NY AG James
?
@NewYorkStateAG
As the elected AG of NY, I have a sworn duty to protect & uphold state law. My office will follow the facts of any case, wherever they lead.

Make no mistake: No one is above the law, not even the President.

P.S. My name is Letitia James. (You can call me Tish.)

It would seem Trump should be familiar with James’ name. In March, as Politico pointed out, James filed court papers accusing Trump:

of illegally entangling his foundation with his 2016 presidential campaign, according to the Associated Press, and is seeking $2.8 million in restitution — as well as a decade-long ban prohibiting the president, Donald Trump Jr., Ivanka Trump and Eric Trump from operating any New York charities.

James also is of note for historic reasons, being the first woman and first black person to be elected New York attorney general.

In any case, Trump’s Twitter tirade against some of New York State’s top politicos continued, hitting on old targets the Clintons and the prior elected attorney general, Eric Schneiderman, saying what “Cuomo’s A.G.” is doing is “harassing all of my.... ....New York businesses in search of anything at all they can find to make me look as bad as possible.”

Cuomo, for his part, said of Trump: “He says the most absurd things,” adding, according to NBC News, that Trump’s “strength is not fact or truth.”

Also noting that New York’s attorney general is elected, not appointed by the governor, Cuomo continued, per NBC:

“His suggestion that it’s my attorney general is incorrect,” he said.