This Is What World Leaders Are saying Behind Trumps Back 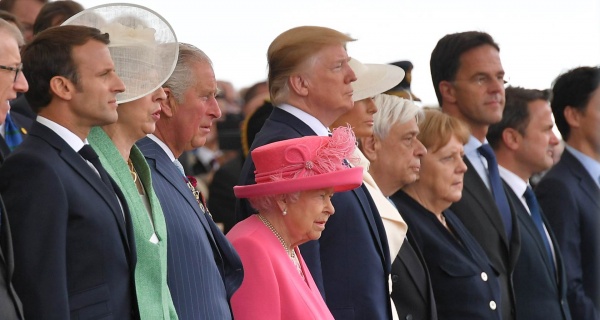 The Dalai Lama has accused Donald Trump of showing a “lack of moral principle” - and possibly of having a screw loose, too.

The spiritual leader of Tibetan Bhuddists offered his unflattering views on the US president during a wide-ranging, and sometimes politically incorrect, interview with the BBC this week.

Asked about Trump, the Dalai Lama said that “his emotions [are] a little bit” and made a gesture waggling his finger near his temple, reports The Guardian.

This it not the first time that Trump has been riciduled by the Dalai Lama, who has been exiled from Tibet since 1959, following a failed uprising against Chinese rule. During an ITV interview in 2016, the holy leader did an insulting physical impersonation of the-then presidential candidate.

Nor is the Dalai Lama the first global figurehead to criticise the US president. Here is what other world leaders have said about Trump.

Kim Jong Un
The North Korean dictator may not be the best judge of sanity, given his own outlandish behavour and claims. But that didn’t stop Kim giving his views on Trump’s mental status back in 2017, before the two leaders met.

As The Guardian reported, Kim scorned the president for allowing “eccentric words to trip off his tongue”, before dismissing him as “the mentally deranged US dotard”.

The North Korean’s equally eccentric phrasing may have been the result of his refusal to employ a translator, but there was no mistaking the contempt behind his remarks about the older man.

Australia’s prime minister
In June 2017, audio leaked of Australia’s then prime minister, Malcolm Turnbull, “apparently mocking” Trump, as the BBC reported. Turnbull could he heard doing an impression of the president as he entertained journalists at an annual dinner that is usually kept off-record.

Most damningly, Turnbull also referred to Trump’s alleged collusion with Russia to get himself elected, saying: “We’re winning in the real polls. You know, the online polls. They are so easy to win... I have this Russian guy…”

Pope Francis
While Pope Francis has refrained from actively rebuking Trump, many observers have noted that the pontiff’s messages to the faithful in the wake of the president’s most controversial actions often seem pointed.

During the presidential campaign, in which Trump vowed to build a wall along the US border with Mexico, the Holy Father shared his thoughts that “a person who thinks only about building walls, wherever they may be, and not building bridges, is not Christian”.

On a more personal note, the man regarded by Catholics as the voice of God on Earth appears to have decreed that Trump is fat. During a visit to the Vatican by the president and first lady in 2017, the Pope asked Melania Trump through a translator: “What do you give him to eat - potica?”

Potica is a nut-filled cake from Melania’s native Slovenia, says The Cut, which claims that the pontiff was fat-shaming her husband.

Queen Elizabeth II
The Queen does not usually make jokes at the expense of world leaders but slipped in off-the-cuff gag during filming of an interview with David Attenborough last year, according to Politico.

Complaining about the noise of a helicopter interrupting the filming, the British monarch said: “Why do they always go round and round when you want to talk? Sounds like President Trump...” After a tiny pause, she added diplomatically: “...or President Obama.”