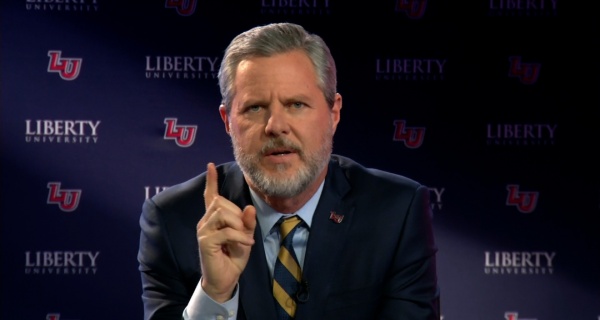 Evangelical leader Jerry Falwell Jr. has come under fire after lashing out at theologian Russell D. Moore over his criticisms of the Trump administration following reports of migrant children being detained in harsh and unsanitary conditions.

"The reports of the conditions for migrant children at the border should shock all of our consciences," said Moore, who serves as president of the Ethics & Religious Liberty Commission, in a tweet on Tuesday morning.

"Those created in the image of God should be treated with dignity and compassion, especially those seeking refuge from violence back home. We can do better than this."

Falwell, who serves as president of the Liberty University and is a staunch supporter of President Donald Trump, responded directly to Moore, saying: "Who are you @drmoore? Have you ever made a payroll? Have you ever built an organization of any type from scratch? What gives you authority to speak on any issue? I'm being serious. You're nothing but an employee–a bureaucrat."

While Falwell's tweet did garner as many as 400 "likes" by early Wednesday morning, it also saw hundreds of negative replies, with many questioning his own values.

"Hello, @JerryFalwellJr. As the founding pastor of @WOLC I've built an organization from scratch (unlike you; I met your dad back in the 80s), I've made payroll & built buildings, *and* I still have a soul. @drmoore is entirely right. In the authority of Jesus' name I say, repent!" one social media user, Brian Zahnd wrote.

"Did Jesus ever make a payroll though?" Matt Christman quipped.

"Think about how many people you just pushed away from Christianity forever with this single tweet," wrote Kendally Brown, adding: "You're a despicable ghoul."

"You're less Christian than I am and I'm entirely non-religious," said Scott Menor. "How does anyone fall for your con?"

"I don't understand how someone has to build a payroll to have the moral authority to comment on the inhumane treatment of children," said Joe Peterson. "Wouldn't, say, a carpenter have just as much authority on the topic as a CEO?"

Moore's comments came in response to a report from The Associated Press describing "perilous" conditions at a facility housing migrant children in Texas.

The government was forced to move most of the children out of the Texas Border Patrol station after AP painted a grim portrait of children being forced to take care of each other, while being given inadequate access to food, water, and sanitation.