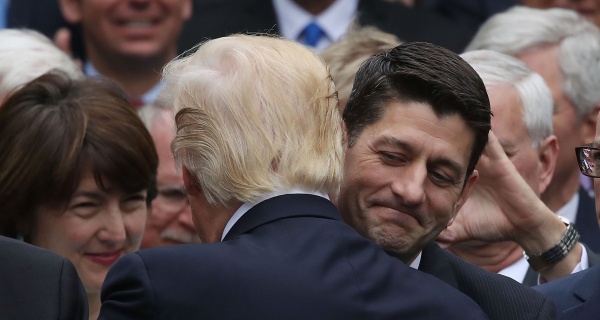 Just when most of the country had seemingly forgotten what a spineless sellout Paul Ryan was, the former Republican House Speaker from Wisconsin returned to give the American people a reminder.

According to The Hill, the failed 2012 vice presidential nominee sat down for an interview with PBS NewsHour’s Judy Woodruff on Sunday, and he praised Donald Trump’s so-called leadership.

“What I think people get excited about is he’s not taking any crap,” the former congressman said of Trump. “I mean, he’s taking on political correctness, he’s taking fights that a lot of people want to see fought.”

He added, with a straight face: “The forgotten man that he speaks to is a person that finally feels like they’re being taken seriously, they’re being paid attention to. And he’s concerned about their issues.”

Ryan admitted that he was too spineless to publicly criticize Trump:

In a pretty stunning admission, Paul Ryan – once second in line for the presidency – said he was too spineless to publicly criticize Donald Trump.

Of course, there are some moments in American history when it’s important for leaders to, you know, lead – to speak out when the country’s values and institutions are on the line.

Paul Ryan was Speaker of the House during one of those moments, and he – along with the GOP lawmakers he led – failed to do the right thing. The party he left behind in Congress continues to abdicate their responsibility.

He refused to call Trump a good role model:

There was one part of Paul Ryan’s discussion with PBS that was telling not for what the former House Speaker said, but for what he didn’t say.

When Judy Woodruff asked whether Trump was a good role model for the next generation, Ryan resorted to his usual defensive mechanism: He took a drink of water and laughed.

What Paul Ryan doesn’t seem to understand is that his appeasement of Donald Trump – from the 2016 campaign through the end of his speakership in January – makes him a pretty lousy role model, too.