Presenting The Second Worst Human Being On Earth: Mitch McConnell 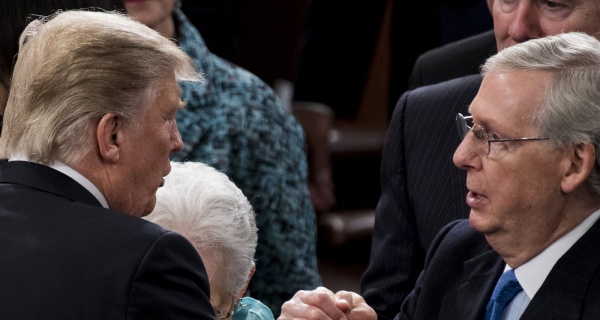 Did you hear what the disgusting, reprehensible, thieving hack who currently serves as Senate Majority Leader said the other day about reparations for slavery? The House Judiciary Committee was getting ready to hold hearings for the first time in the history of this country on the issue of finding a way to compensate African-Americans for the crime of slavery, and a reporter asked Senator Mitch McConnell of Kentucky what he thought of the idea.

“I don’t think reparations for something that happened 150 years ago for whom none of us currently living are responsible is a good idea,” replied the jowly McConnell, speaking to reporters in a hallway outside his office in the Capitol, flanked by two white Republican fellow-senators. “I think we’re always a work in progress in this country but no one currently alive was responsible for that and I don’t think we should be trying to figure out how to compensate for it.”

What is it about these racist southern goofs in the Senate, huh? McConnell is just like his racist twin from Alabama, Jefferson Beauregard Sessions, and the Prince of Race-Baiting, Jesse Helms of North Carolina, and the King of Inadvertent Racist Idiocy Trent Lott of Mississippi, and the High Priest of Racist Hypocrisy Strom Thurmond of South Carolina. All of them somehow managed to get themselves elected to the powerful position of senator, and yet not one of them found it within himself to climb out the gutter of racism that put them there.

You remember Helms, don’t you? He was re-elected to the Senate using a television ad showing a pair of white hands tearing up a letter of rejection for a job with a voice-over saying, “You needed that job, and you were the best qualified. But they had to give it to a minority because of a racial quota. Is that really fair?”

How about Trent Lott, who was quoted saying of the state of Mississippi, “When Strom Thurmond ran for president, we voted for him. We’re proud of it. And if the rest of the country had followed our lead, we wouldn’t have had all these problems over the years, either.”

And then there is Strom Thurmond himself, who famously ran for office pledging to support and defend segregation in the south, and who had fathered a black daughter in 1925.

At least McConnell got one thing right. Nobody who is alive today was alive during slavery, which President Abraham Lincoln famously ended with the Emancipation Proclamation on January 1, 1863, in the middle of the Civil War.

What McConnell conveniently ignored, however, is that none of us had to be alive during slavery to have witnessed what this country has done to its black citizens since then. McConnell was born in 1942, but let’s just take the time since I was born in 1947.

My father was an army officer, and I grew up on army posts, largely in the south. The schools I attended were racially integrated only because President Truman had integrated all of the military services by executive order in 1948. When I lived in Mitch McConnell’s home state of Kentucky in 1953, the school that I went to on the base at Fort Campbell was integrated. But only a few miles away, every civilian school in the state of Kentucky was segregated.

In fact, as late as 1964, when I was a senior in high school in Alexandria, Virginia, on the way to school every morning headed north on Route 1, my school bus passed two yellow school buses going in the other direction. They were taking black high school students from south Alexandria 10 miles away to the nearest all-black high school, passing at least two other high schools on the way. My school had a few black students because they were the sons and daughters of black men who served in the military. The federal government had to force the State of Virginia to accept black military children in northern Virginia schools by threatening to withhold the federal funds it contributed to the local school districts to pay for the military kids, who comprised close a majority in most schools.

We lived in an all-white suburb of split-levels and ranch houses built in the 50s and 60s. The streets were paved. There were sidewalks and streetlights. But only a few miles away was an all-black community that had been settled after the end of slavery in the 1800’s. It had dirt roads for streets. There were no sidewalks or streetlights, and many homes did not have indoor plumbing or electricity.

This state of affairs existed throughout Virginia and other southern states. Black people were red-lined out of all white communities and relegated to separate towns or all-black neighborhoods within towns. Those neighborhoods were frequently called “the quarters,” after the term “slave quarters,” where slaves were forced to live during the years of slavery. As late as the early 1990s, I used to visit a small town in Mississippi where the black residents were made to live in “the quarters” in homes that amounted to little more than wooden shacks along dirt roads. Some homes had electricity, and some didn’t, but the neighborhood was not hooked into the town’s sewer system, and the homes that did have indoor plumbing had pipes which discharged into nearby open ditches and creeks.

Why was this kind of shit still going on more than a hundred years after the end of slavery? Because there were systems of voting in place all over the south that prevented the votes of black people from counting for anything in local elections. After the passage of the Voting Rights Act in 1965, many southern towns and counties changed their systems of voting for government representatives like county boards of supervisors or town boards of selectmen from district to at-large representation.

Say a county was 30 or 40 percent black, fairly frequent in rural areas of states like Mississippi and Alabama. After blacks got the vote, you would expect that they would be able to elect 30 to 40 percent of the county supervisors. But in county after county, they pushed through at-large systems, so everyone voted for a slate of five or seven supervisors or selectmen. White majorities would vote for all-white slates. The all-white county or town boards they elected would consistently vote to deny sewage coverage, or paved roads, or sidewalks, or streetlights to black neighborhoods. It took individual lawsuits, one after another, over a period of years in many cases to get the courts to overturn the racist systems of representation in the south.

And then the Roberts Supreme Court came along and defenestrated the enforcement clause of the Voting Rights Act in U.S. v Shelby County, fulfilling the dreams of Mitch McConnell and Trent Lott and Jefferson Beauregard Sessions and the rest of them to get things back to the way they used to be before black people caused “all these problems over the years.”

Mitch McConnell is satisfied with the way things are. “We’ve tried to deal with our original sin of slavery by fighting a civil war, by passing landmark civil rights legislation. We elected an African American president,” McConnell said as the House Judiciary Committee made history with its hearings on reparations.

He went to segregated schools. There were separate bathrooms and drinking fountains for black people in Kentucky when he was growing up. Black people didn’t have the same voting rights as white people in his home state when he was in high school and college. Black farmers were denied the kinds of federally guaranteed farm loans and insurance afforded to whites.

As Senate Majority Leader, McConnell denied the “African American president” we voted into office his choice for the Supreme Court. He stole that nomination and forced through two justices who will be guaranteed votes to uphold racist decisions like U.S. v Shelby County.

Mitch McConnell is the second most dangerous man to democracy in this country. The only person keeping him from becoming Number One is Donald Trump. Even when Trump is gone, Mitch McConnell will still be with us, with his racism and his thievery and his jowls.