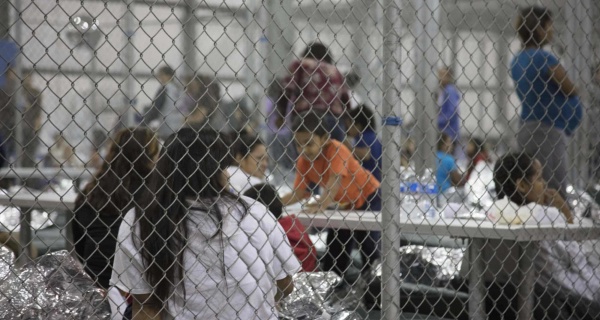 In February 2018, U.S. border agents took a four-month-old baby from his father, who was deported overseas. Last May, a 16-year-old boy died from influenza after being held in a detention processing facility in McAllen, Texas. Earlier this month, a transgender migrant died hours after being paroled from custody.

As more unaccompanied minors and other asylum-seekers arrive on the southern border, alarming accounts continue: reports of rotten food causing illness, kennel-style fences holding migrants in El Paso, Texas, and another facility in the same city holding more than six times its capacity of detainees. This week, the Department of Health and Human Services announced that it would handle the influx of unaccompanied minors by housing some of them at Fort Sill, an Army base in Oklahoma that held detainees of Japanese descent during World War II, a bleak reminder of another time when America failed to live up to its values.

Beyond each individual crisis, we should ask, what are these places? Are they refugee camps, or are they something else? History provides the answer.

People today tend to think of Nazi death camps as defining the term “concentration camp.” But before World War II, this phrase was used to describe the detention of civilians without trial based on group identity. During a rebellion in Cuba in 1896, the Spanish Empire swept rural peasants—mostly women and children—off the land. Declaring them a threat, Spanish forces held them behind barbed wire in fortified cities. Around 150,000 people died. Three years later, America opened its own concentration camps for women and children as part of an effort to suppress a revolt in the Philippines during the Philippine-American War.

Around the globe in southern Africa, the British government opened its own concentration camps in the new century, embracing civilian detention as a civilizing force for an “uncultured” people. Unsanitary camp conditions and inadequate food triggered medical crises. By the time the British moved to address the disaster they had created, it was too late for many detainees. Tens of thousands of children died.

These camps opened and closed in different settings but never vanished from the face of the earth. In southern France during the Spanish Civil War, hundreds of thousands of refugees fled across the border, ending up in camps without sanitation or food. In Myanmar in 2012, more than a hundred thousand Rohingya Muslims were segregated into camps that left the community vulnerable to ethnic cleansing years later.

Today’s U.S.-Mexico border camps are the heirs of these concentration camps. Putting people in similar conditions will unleash illness and death. The more people who are detained, the larger these crises will become.

By the time a country gets to the point that those in power and a majority of their supporters embrace policies that back up virulent rhetoric and accept detention as the central response to a political or humanitarian problem, it is very difficult to undo.

From its first days, the Trump administration has mouthed dehumanizing rhetoric about migrants. On the day Trump announced his candidacy, he fired his opening salvo against Mexicans, and, as president, he has only continued in the same vein about all migrants crossing the southern border. Setting up measures like a weekly immigrant crime report during the first weeks of the administration, the White House underlined the president’s antagonistic approach.

In a tweet on Monday night, Trump wrote about plans for the U.S. Immigration and Customs Enforcement agency to initiate mass immigration arrests and removal: “Next week ICE will begin the process of removing the millions of illegal aliens who have illicitly found their way into the United States. They will be removed as fast as they come in.” While the scope of deportation that Trump is threatening appears to be unlikely given current resources, attempts at mass deportation typically cause additional detention crises, in transit camps and at transportation sites charged with moving detainees. This operation will only further degrade the system.

This year, we have seen the border camps grow and the declaration of a phony national emergency that is turning into a real one. If the administration were focused on humanitarian issues, these facilities might have more in common with refugee camps. But the administration has repeatedly lied about family separation, claiming at first that it wasn’t happening, while taking children from parents as a form of deterrence. President Trump’s antipathy to Mexicans and Central Americans is being transformed into policy at the highest levels of the most powerful government in the world. In combination with miserable conditions on the ground and brutal acts by agents charged with enforcement, U.S. detention camps—which were already abysmal under several prior presidents—have evolved into a more dangerous entity.

Decades of stoking resentment have polarized views on immigration. Embracing harsh rhetoric in 1993, President Clinton helped reverse tolerance for migrants by proclaiming that America would not “surrender our borders to those who wish to exploit our history of compassion and justice.” During his administration, the Republican Congress went further, expanding detention broadly for migrants, reducing their ability to get legal representation, and making it easier to deport them. Clinton embraced this legislation, and future administrations followed suit.

Even if additional resources are provided for those in detention, if those resources are accompanied by further militarization of the border, the administration’s policies will be working at cross purposes with each other. If the detention-centered approach is kept, no amount of aid will keep these camps from becoming part of the American landscape for years to come. Arresting immigrants for even minor infractions and ramping up detentions at the border, the administration has also rescinded Obama-era easing of some rules for migrants with U.S.-born children or no criminal record, thereby expanding a backlog of cases that already stretched for years. Intentionally jamming a faltering system can overload it beyond repair.

A camp in a country in which the leader openly expresses animosity toward those interned, in which a government detains people and harms them by separating children from their parents or deliberately putting them in danger, is much closer to a concentration camp than a refugee camp. Nothing we are doing is likely to repeat Auschwitz, or to come anywhere close to it. But the history of concentration camps shows us that when it comes to this kind of detention, even when a government isn’t plotting a genocide, shocking numbers of people can still end up hurt—or dead.