Trump Crony, Mitch McConnell, Must Be Defeated--Here's How To Do It 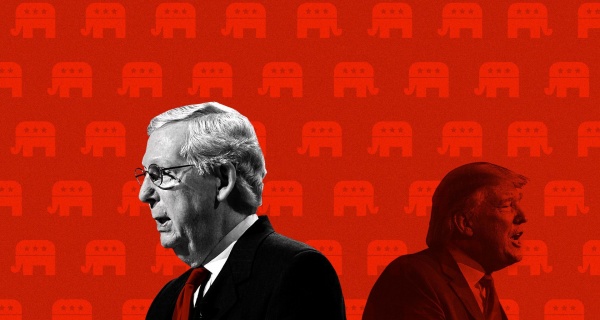 Congressional Democrats are sending a message that is focused on Majority Leader Mitch McConnell.

McConnell likes to call himself the “grim reaper,” which is a rather odd label for a politician to embrace during a year when he is running for reelection. But I suppose that if you want to cast yourself as the champion of “nostalgia voters” and embrace a revanchist agenda, killing off anything that helps the country adapt to the future might work.

But one thing is worth noting about McConnell’s response to this latest messaging. When discussing it with Laura Ingraham, the majority leader embraced his role as the grim reaper killing off “socialism.” The examples he gave weren’t the ones noted by Pelosi and Schumer in the videos above, because they all have broad bipartisan support among voters. Instead, he named proposals that haven’t passed in the House: the Green New Deal, single-payer health care, and discussions about granting statehood to Washington, D.C. and Puerto Rico. That last one is especially odd because it has absolutely nothing to do with socialism.

What McConnell obviously wants to avoid is the fact that he has blocked efforts to limit dark money in politics, net neutrality, background checks for all gun purchases, protections for Dreamers, paycheck fairness, and the Violence Against Women Act. We can now add that he is blocking attempts to protect our elections from foreign interference.

Two years ago I wrote that Democrats should do to McConnell what Republicans have done to Pelosi. I was referring to the way that she became the poster child that every Republican ran against.

[E]very Democratic candidate for Senate could make the case that a vote for their opponent is a vote for McConnell and against our values in a democracy. This is one time when I don’t mind taking a page out of the Republican playbook.

Beating McConnell in 2020 and taking back the Senate are just as important as beating Donald Trump. Exposing voters to the way in which the majority leader has made the Senate a graveyard for legislation that has broad support among voters is a great way to start.