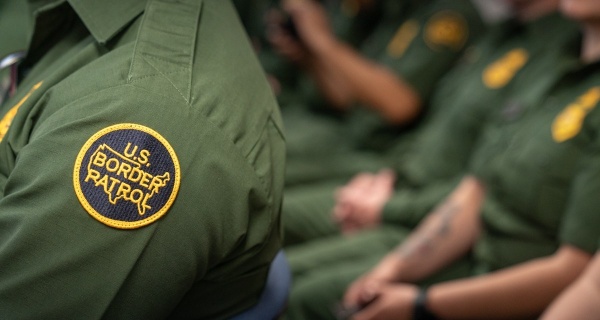 In the days before he allegedly struck a 23-year-old undocumented Guatemalan man with a government-issued Ford F-150, Border Patrol agent Matthew Bowen sent a text to a fellow agent. In the exchange, which federal prosecutors now claim offers “insight into his view of the aliens he apprehends,” Bowen railed against unauthorized migrants who’d thrown rocks at a colleague as “mindless murdering savages” and “disgusting subhuman shit unworthy of being kindling for a fire.” The text message also includes a plea to the president: “PLEASE let us take the gloves off trump!”

Two weeks later, on December 3rd, 2017, Bowen was on patrol near Nogales, Arizona, when he spotted a suspected unauthorized border crosser. Identified as Antolin Rolando Lopez-Aguilar in a federal affidavit, the man had been hiding but took off running back toward the Nogales point of entry, “in an apparent effort to avoid apprehension,” the affidavit states.

Instead of pursuing Lopez-Aguilar on foot, Bowen chased after him in his federal vehicle, known as a “Kilo Unit” in Border Patrol lingo. As caught on camera, Bowen maneuvered “the front grille of the truck directly behind Lopez-Aguilar,” according to the affidavit. With the F-150 bearing down on him, Lopez-Aguilar reached back “to ‘push off’ of the hood” before Bowen “accelerated the… Kilo Unit directly into the back of Lopez-Aguilar’s body, knocking Lopez-Aguilar to the ground,” the document states. The Ford’s tires came to a full stop “within inches of running Lopez-Aguilar over where he lay on the ground.”

Bowen, now 39, was indicted in May 2018, on two counts — one, a civil rights crime, for what prosecutors call Bowen’s choice to use “deadly force against a person who was running away from him and posed no threat,” and the other, an obstruction charge, for his alleged effort to “cover up his crime.” Bowen has pleaded not guilty to both counts. (Lopez-Aguilar was scraped up, but not seriously injured according to court documents, and reportedly sentenced to 30 days for the misdemeanor offense of illegal entry into the United States.)

Bowen’s trial is due to begin in August. But the case is already shining a spotlight on a troubled culture at Border Patrol, the law enforcement arm of Customs and Border Protection, at a moment when both agencies have been grappling with a surge in migrants, and faced allegations of widespread wrongdoing, ranging from physical and sexual abuse of minors to housing migrants in substandard shelters, including one likened to “a human dog pound.”

The text exchanges between Bowen and fellow agents — entered into the court record by the defense, which seeks to exlude them at trial — suggest a work environment in which demeaning epithets, ranging from “guat” to “fucking beaners,” are common, and in which violence against undocumented border crossers is treated as a joke.

Throughout the texts, illegal border crossers are referred to as “tonks.” A federal court case from 2004, which also centered on accusations of excessive force by the Border Patrol, includes an agent’s definition of “tonk” as “the sound heard when a ‘wetback’ is hit over the head with a flashlight.” Josiah Heyman is the chair of the anthropology department at the University of Texas, El Paso. In research on the border, he’s heard Border Patrol agents use the term “tonk” since the early 1990s. “That’s their position in the hierarchy,” he says of undocumented migrants in relation to Border Patrol agents. “They’re hittable people.”

(Some defenders of the Border Patrol have suggested TONK is merely an acronym meaning “Territory of Origin Not Known,” or perhaps, in an alternate spelling, TONC, meaning “Temporarily Outside Native Country.” Heyman calls such alternate definitions “manipulative,” insisting the word “was described to me explicitly as the sound of someone being hit — by agents themselves.”)

The text messages from Bowen were obtained with a federal search warrant. According to the defense — whose court exhibit, embedded below, grouped them under headings like “Messages that Could be Perceived as Racist of Offensive” — such texts should be excluded from trial, because “messages that refer to aliens in a pejorative manner, or that reflect Mr. Bowen’s political beliefs, have no bearing on any element of the offenses the Government will seek to prove at trial.”

Prosecutors, to the contrary, argue that, Bowen “is seeking the exclusion of relevant evidence that tends to prove his guilt.” Quoting portions of Bowen’s texts, the government told the court:

The defendant’s belief that Border Patrol was too restrictive in what it allows its agents to do to “apprehend wild ass runners who don’t want to be apprehended” is relevant to whether the defendant willfully used his F-150 to effect the arrest of the fleeing alien in this case. The defendant’s belief that the aliens he encounters in the field are “disgusting subhuman shit unworthy of being kindling for a fire” makes it more probable that the defendant thought it appropriate to use his F-150 to effect the arrest despite the significant danger to the alien of being run over.

According to the prosecution, Bowen wrote about using a technique meant for disabling another automobile to instead hit a human being: “I used an f150 to do a human pit maneuver on a guat running from an agent,” Bowen wrote to another agent the day after the incident. “It was in front of cameras and everybody thought I ran him over… even though the tonk was totally fine. Just a little push with a ford bumper.”

According to the government, “pit” describes the “Precision Immobilization Technique” in which a law enforcement vehicle “disables a fleeing target vehicle” by striking it “so it spins out and stops.” The prosecutors insist: “A ‘human pit maneuver’ is not a recognized law enforcement term but it is an accurate description of the defendant’s actions in the charged crime,” citing video evidence from the scene that has not been made public.

Bowen’s story changed quickly after he realized the incident could result in serious consequences, the government alleges. Prosecutors quote a text sent roughly a week later in which Bowen tells another agent: “I submitted a supplemental report that documents how it was unintentional, accidental and I was not familiar with how responsive the acceleration was on those new F-150s etc.”

The defense may have some luck limiting the use of Bowen’s texts at trial. A magistrate judge has recommended to the court that texts sent before the date of the offense — including the “subhuman shit” text — be excluded, reasoning that the alleged crime “was not preplanned,” but rather “a spontaneous event.” A hearing on the texts’ inclusion at trial is set for early July.

Beyond the legal case at hand, the messages sent among Bowen and other agents in the Border Patrol raise troubling questions about the agency’s culture. In one text exchange, a colleague appears to joke with Bowen about using oil to intensify the effect of an electrical shock from a Taser: “Did you… use regular peanut oil while tazing??” the agent asks Bowen. “For a frying effect.” Bowen replies: “Guats are best made crispy with an olive oil from their native pais.” (País is the Spanish word for country.)

A press officer for Customs and Border Protection (Border Patrol’s parent agency) did not respond to questions about the meaning of “tonk” or whether the agency had any policies about the use of language by agents like “guat” and “beaner.” Responding to an ACLU report last year alleging abuses at the border, the agency insisted: “The men and women of CBP perform their duties professionally and treat everyone equally with dignity and respect.” Bowen’s attorney declined an interview request, and did not reply to specific questions about whether Bowen understood “tonk” to mean the sound of striking a migrant on the head.

The defense, however, groups otherwise anodyne texts containing the word “tonk” under the subject heading of potentially “racist or offensive.” Bowen’s lawyer has also asked the court to edit out the word “tonk” in messages that are allowed into the record, arguing: “the words ‘guat’ and ‘tonk’ should be replaced with ‘alien’ to eliminate the prejudice caused by the use of such terms.” If such texts are admitted into evidence unedited, a motion filed by the defense indicates that “Mr. Bowen would seek to establish that the use of these terms is commonplace throughout the Border Patrol’s Tucson Sector, that it is part of the agency’s culture.”

Violence by the Border Patrol is not simply rhetorical. Heyman, the UTEP professor, is a co-author of a 2013 study called Bordering on Criminal: The Routine Abuse of Migrants in the Removal System, published by the nonpartisan Immigration Policy Center. Interviews with 1,000 recently deported migrants revealed that 11 percent claimed physical mistreatment at the hands of U.S. authorities — and that two thirds of the time (67 percent) that alleged abuse was perpetrated by Border Patrol. The authors dismiss the notion that the agency is dogged by the behavior of a few “bad apples” suggesting, instead, that “abuse of migrants while in U.S. custody is a systematic problem relating to an ongoing institutional culture.”

Indeed the word tonk may align with the practice of some Border Patrol agents. A recent ProPublica report examined the alleged abuse of more than 200 migrant children by Border Patrol and Customs agents. It cites the example of a boy who was observed with a head laceration, closed with three staples, who claimed to have been hit over the head with a flashlight. According to the report: “Other children reported being punched, shocked with Tasers, and denied food and medicine. Many described being bludgeoned with flashlights.”