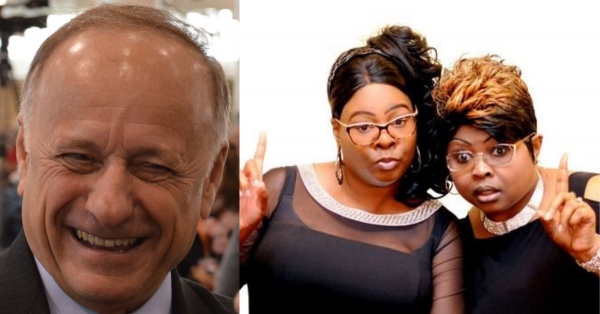 Rep. Steve King (R-IA), who was condemned by several members of his own party for being a racist earlier this year, has invited Trump-loving social media personalities Diamond and Silk to introduce his new anti-immigrant bill.

In an announcement released Monday, King said that Diamond and Silk would join him in the unveiling of the “Diamond and Silk Act,” a bill that would take funds from so-called “sanctuary cities” that do not assist federal authorities with immigration enforcement, and put them toward programs aiding American veterans.

In the news release, the congressman said that his inspiration for the bill came from “a discussion on immigration policy… held with Diamond and Silk earlier this year.”

This is not the first time that Diamond and Silk have given their stamp of approval to a white Republican with a history of racism. In 2016, they personally endorsed Paul Nehlen, a white supremacist who at the time was running as a primary challenger against former Rep. Paul Ryan (R-WI). Nehlen turned out to be such a toxic personality that he was eventually kicked off of Gab, an alternative to Twitter that has embraced members of the alt-right.