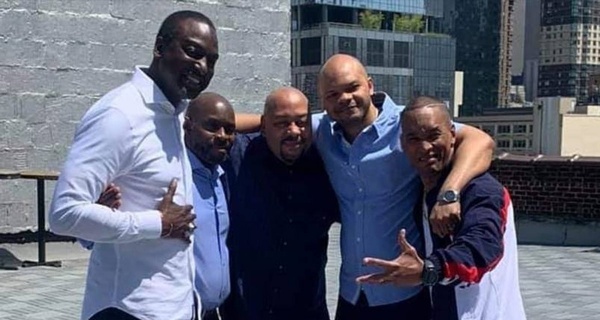 The five men who were arrested as teenagers, falsely convicted, sentenced to years in prison, and eventually exonerated for the rape and assault of a white jogger in Central Park in 1989, have never been keen on the name “Central Park Five.” They avoid the phrase when possible. It was not a moniker they chose, but one given to them by the press: by outlets that regularly printed their legal names, though all five were underage; by tabloids that often failed to write “allegedly” when describing their charges; by papers that ran full-page ads from a playboy real estate developer with latent political ambitions, attacking them in huge black font: “BRING BACK THE DEATH PENALTY.”

Friday afternoon, at the American Civil Liberties Union of Southern California’s 25th Annual Luncheon, where the five men were being honored, much care was taken to orient the celebration away from that phrase, and toward the five people it had obscured: Korey Wise, Antron McCray, Yusef Salaam, Kevin Richardson, and Raymond Santana.

As actor Michael B. Jordan introduced the five honorees, he retold the famous story for the crowd. “It was East Coast news, but a familiar story to anyone growing up black in America,” Jordan said. “We didn’t know their names, but we knew their ages: 15, 14, 16—the same ages we were. They could be us.”

The men had come to receive the inaugural Roger Baldwin Courage Award, and to accept another on behalf of director Ava DuVernay, whose recent Netflix series When They See Us retold their decades-long legal battle. DuVernay had won the ACLU’s annual Social Responsibility in Media Award—an irony lost on no one, least of all Yusef Salaam. When Salaam took the stage to accept her award, he introduced himself with a new name: “I am one of the Exonerated Five.”

“After decades of being known as the Central Park Five, we thank Ava for acknowledging our humanity and telling our story with honesty and factual representation,” Salaam said, during his speech accepting her award. “We had to struggle to break the label that the media gave us. We stumbled forward, falling on our face at times.”

During his speech, Salaam recalled when the media had been less humane: when columnists called them a “wolf pack,” and when Pat Buchanan insisted that if only “the eldest of that wolf pack were tried, convicted and hanged in Central Park, by June 1, and the 13- and 14-year-olds were stripped, horsewhipped, and sent to prison, the park might soon be safe again for women.”

Salaam lingered on the full-page ad taken out by the man currently occupying the White House.

“Korey [Wise] said it so well,” Salaam said. “He said, when Donald Trump took out that full-page ad, and put them in all of New York City’s newspapers, calling for our execution, he placed a bounty on our head.”

“They had published our names, our phone numbers, and our addresses in New York City’s newspapers. Imagine the horror of that. Just step backwards once, to the 1950s—we would become modern-day Emmett Tills. It was almost as if they were trying to find someone from the darkest enclaves of society to come into our homes, drag us from our beds, and hang us from trees in Central Park.”

As he spoke, Salaam took long pauses. At one point, an aide emerged with a fistful of tissues. “I’m not ashamed to cry in front of you,” he said. “These are tears of pain. These are tears of joy. We are the heroes of this story.”

Watch the trailer below: