Republican Support For Trump Has Moved To The Fanatical Stage 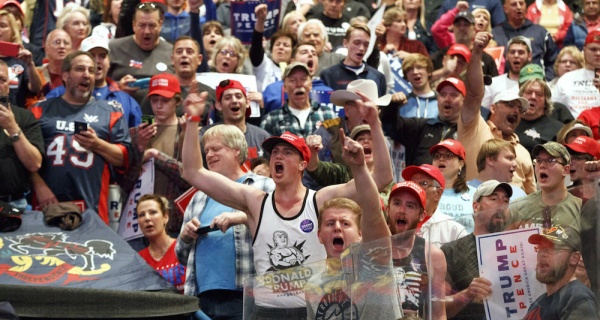 Mick Mulvaney, the acting White House chief of staff, says it’s reasonable to think the president should be protected from seeing a warship with John McCain’s name on it.

The John S. McCain, a destroyer named after three generations of McCains — two legendary admirals and the late Arizona senator — was in port in Japan during the president’s recent visit. Before his arrival there, someone from the White House asked the Navy to move the ship “out of sight.”

“It was probably someone on the advance team,” Mulvaney said on “Meet the Press,” improbably suggesting he doesn’t know exactly who issued the directive. “The fact that some 23-, 24-year-old person on the advance team went to that site and said, ‘Oh my goodness, here’s the John McCain. We all know how the president feels about the former senator. Maybe that’s not the best backdrop. Can somebody look into moving it?’ That's not an unreasonable thing,” Mulvaney said.

Maybe it’s not an unreasonable question for a presumably young and inexperienced staffer to ask. But it was an extremely unreasonable request to emanate from the White House — which is why the Navy ultimately reversed the decision to hang a tarp over the ship’s name and park a barge in front of it.

Mulvaney is arguably the most competent senior member of the Trump administration right now. So the pressing question is: Does he mean what he’s saying? As spin it’s primo stuff. But if he believes these kinds of actions are reasonable, it’s disturbing.

In the early days of the Trump insurgency in 2016, it was dismaying how conservative pundits and politicians would publicly call Donald Trump “the world’s greatest negotiator” or “a man of faith” in front of a TV camera — but then say in private, “What in the world is wrong with this guy?” They were generally making the transactional case for Trump: He’d keep Hillary Clinton out of the Oval Office. The chaos and crudeness were worth getting good judges, tax cuts and less regulation.

That doublespeak and lying used to vex me. But the newfound sincerity troubles me even more.

Conservatives increasingly have to be all-in, heaping praise on Trump’s behavior or scolding those who criticize it. Defending protectionism, denouncing in toto the “witch hunt” and parroting his ad hominem style is expected, and rewarded. For instance, the anti-tax group Club for Growth is trying to lure Rep. Mark Walker to challenge Sen. Thom Tillis in the North Carolina Republican primary. Why? Tillis has been insufficiently celebratory of Trump, demonstrated by his brief opposition to an “emergency declaration” to fund a border wall (which Tillis ultimately voted for). Businessman Garland Tucker is already in the race charging Tillis of being insufficiently Trumpy. The Senate Leadership Fund, a super PAC, meantime, is defending Tillis by accusing Tucker of being an “anti-Trump activist.”

Also under fire: Rep. Justin Amash. He’s an ideologically hard-line tea party-style conservative from Michigan, but he read the Mueller report and concluded, defensibly, that it details actions by the president that are impeachable offenses.

The response from the right has been to, if not unperson Amash, then to un-conservative him. The Freedom Caucus moved to censure Amash. House Minority Leader Kevin McCarthy falsely said Amash “votes more with Nancy Pelosi than he ever votes with me.” Washington Post columnist Henry Olsen, a conservative defender of Trump’s, insisted that Amash is “more like a typical Democrat” because he disagrees with various Trump policies — even though Amash’s disagreements are based on his libertarian-conservative philosophy, which is entirely different than your typical Democrat’s.

Support for Trump is coming to define what it means to be a conservative. This is also the context of recent attacks on the National Review’s David French. Working from the premise that Trump — of all people — is the vehicle for some sort of social conservative restoration, some Catholic writers associated with the journal First Things have attacked French, a devout and deeply socially conservative Christian, as a symbol of all that is wrong with conservatism largely because he is a prominent critic of Trump.

One reason Trump has become a conservative litmus test is that there’s a policy vacuum on the right and Trump’s personality is filling the void.

Another is the GOP voter base, which has imposed a binary choice of its own: You’re either with the president or you’re with “the left.”

That’s what is so telling about the John McCain episode. Republicans — apparently including Mulvaney — have internalized Trumpism so deeply that they now see the world through his eyes. It’s perfectly “reasonable” for a White House staffer to think the commander in chief should be shielded from even the name of his late adversary because Trump’s feelings are all that matter.