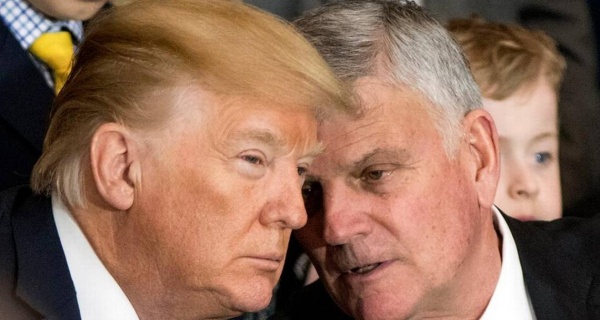 Franklin Graham warned that millions of Trump supporters would start a civil war if Trump is brought down for any reason.

I think what is going on in Washington has something to do with [my call to prayer]. It has bothered me and it has been a burden on my heart because this president is being attacked more than any president in modern history; attacked by the press more than Abraham Lincoln.

So he is the president of the United States. You had two years of investigation that came up with nothing. Now the media and his opponents in Washington are doing everything they can to destroy him. What we need to remember is that he is the president. That doesn’t mean that he is a perfect person. He is flawed like all of us. He has made plenty of mistakes but he is the leader of this nation. We have got huge problems in front of us.

If the president was brought down for whatever reason, it could lead to a civil war. There are millions of people out there that voted for President Trump that are behind him that are angry and they are mad. We are just living in a very dangerous territory, and we need God’s help.

Graham has already called for a national day of prayer for Trump because he thinks that Jesus can help Trump avoid impeachment. Jesus turned water into wine, but it is uncertain if even Christ himself could fix the level of corruption and stupid in this White House.

Franklin Graham denies endorsing Donald Trump, but he pulled out of the far-right’s favorite threats. In hiding behind the Bible mob style Graham warned that if anything happens to Trump the country gets it.

This is the same threat that Trump supporters have been throwing out there for years, and nothing ever happens. Trump supporters, just like their president, appear to be all talk and no action. The threats aren’t going to work. The nation is ready to call Graham’s bluff and get rid of Trump.