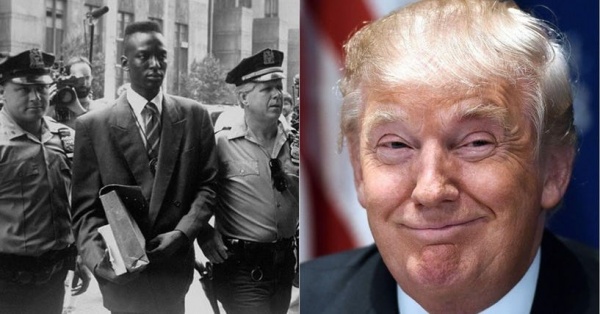 President Trump — who infamously demanded death penalties for a group of black and Hispanic teenagers wrongfully convicted of raping a woman in Central Park — claimed Monday that African-Americans won’t vote for Joe Biden in 2020 because the former vice president backed controversial tough-on-crime legislation over two decades ago.

On his way back from a trip to Japan, Trump thumbed out a couple of tweets taking aim at Biden over a 1994 bill he supported as senator that imposed the “three strikes” rule mandating life imprisonment for certain repeat offenders.

“Anyone associated with the 1994 Crime Bill will not have a chance of being elected,” Trump tweeted. “In particular, African Americans will not be able to vote for you.”

Brushing aside his own tough-on-crime advocacy, Trump continued, “I, on the other hand, was responsible for Criminal Justice Reform, which had tremendous support, & helped fix the bad 1994 Bill...That was a dark period in American History, but has Sleepy Joe apologized? No!"

Spokespeople for Biden’s 2020 campaign did not return requests for comment.

The president was likely referring to the First Step Act, which enacted some sentencing reforms and passed both chambers of Congress last year in a rare moment of bipartisanship.

However, long before the First Step Act, Trump wanted five teenagers executed for a crime it turned out they hadn’t committed.

“BRING BACK THE DEATH PENALTY. BRING BACK OUR POLICE,” screamed an ad Trump took out in all four New York City newspapers in 1989 after five black and Hispanic teens were charged with assaulting and raping a jogger in Central Park.

“I want to hate these muggers and murderers,” Trump’s ad continued. “They should be forced to suffer, and, when they kill, they should be executed for their crimes.”

The defendants in the case — who became known as the Central Park Five — all had their convictions overturned in 2002 after a prison inmate confessed to the brutal crime.

The city gave the five a $41 million settlement for wrongful convictions in 2014. Nonetheless, Trump has never apologized for his harsh ad.

A White House spokesman did not return a request for comment Monday evening.

Some of Biden’s Democratic primary opponents have criticized him for supporting the 1994 bill, including California Sen. Kamala Harris, who said at a recent campaign rally that the measure "did contribute to mass incarceration in our country.”