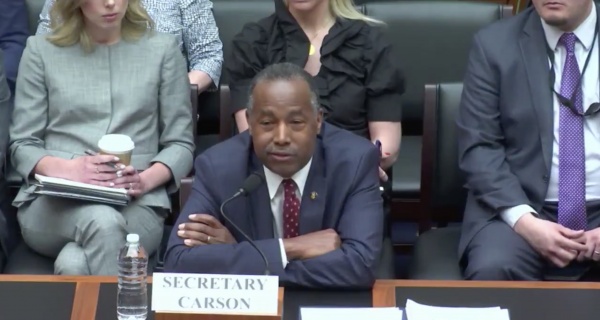 A serious House hearing teetered on the inane as Democratic members of Congress took turns grilling Housing and Urban Development (HUD) Secretary Ben Carson on Capitol Hill Tuesday afternoon. The House Financial Services Committee hearing was called after HUD recently proposed a rule that would likely result in tens of thousands of children of undocumented immigrants being homeless.

Carson’s testimony all but backed up the incessant accusations of incompetence that have helped plague his tenure leading the federal agency that is “responsible for national policy and programs that address America’s housing needs, that improve and develop the Nation’s communities, and enforce fair housing laws.” He came off as ignorant to a number of pressing issues that, in theory, a HUD secretary should be well-versed in.

But it was New York’s freshman Rep. Alexandria Ocasio-Cortez whose line of questioning stood out the most as the progressive Congresswoman got Carson to admit that HUD’s “One Strike” rule — which can “evict tenants for alleged criminal activity by the tenants or their associates, regardless of the tenants’ fault, knowledge, or ability to control the activity” — could lead to a family being subjected to stop-and-frisk tactics that have been declared unconstitutional.

At one point during a bizarre exchange between Carson and California Rep. Katie Porter, the retired neurosurgeon had a brain freeze moment when he appeared to confuse a common real estate acronym with an Oreo cookie.

Carson later joked about the back-and-forth, but the joke seemed to be on him.

New York Rep. Nydia Velazquez laid into Carson, calling him out about his promise “to take care of the children in public housing.” She called HUD’s proposed budget, which includes the rule about immigrant families, “shameful” and “Immoral” and said it “fails American citizens” in part because she said it was designed “for the sake of scoring political points.”

Another unintended moment of levity came when newly elected Massachusetts Rep. Ayanna Pressley pressed Carson to answer a question about whether his proposed rule was harmful, but he refused to say “yes or no.” Instead, he told Pressley “you already know the answer” before he channeled his inner Maxine Waters and said he was “reclaiming my time.” When Pressley said, “You don’t get to do that,” Carson, seeming uninformed, simply said, “oh.” Waters, the committee chair, quickly gave the floor back to Pressley, who also asked Carson, “Under your watch and at your helm, would you allow your grandmother to live in public housing, under these conditions?”

New York Rep. Carolyn Maloney also got Carson to openly admit that he did not have a plan in place for the children living in public housing who would be at risk of being displaced.

Even in the face of logic, Fox News reported that Carson defended the rule.

“If you read the rule carefully, you will see that it provides a six-month deferral on request, if they have not found another place to live,” he said, adding that there is a renewal “for a total of 18 months, which is plenty of time for Congress to engage in comprehensive immigration reform so that this becomes a moot point.”

The hearing came on the heels of a damning report claiming that Carson violated the law with his exorbitant spending to decorate his office on Capitol Hill.

The Government Accountability Office (GAO) determined it was illegal for Carson to spend $31,000 for a dining set, although he technically didn’t need it, and another $8,000 on a dishwasher in the office kitchen. “Agencies are required to notify Congress of expenditures over $5,000 to furnish an executive’s office,” Politico reported on Thursday.

Recently proposed HUD policy showed that Carson was a major proponent for a rule that would effectively evict as many as 55,000 immigrant children from the nation’s public housing. The Washington Post reported that the rule would require each person living in public housing to be of “eligible immigration status.” If the parents or guardians of children are undocumented immigrants, they would face eviction and likely be forced to bring their children with them regardless of their children’s legal statuses.

Days after that report, former Speaker of the House Newt Gingrich penned an op-ed for Newsweek showering Carson with lavish praise for what could also be a ploy to score political capital in the same vein that Velazquez described during the hearing Tuesday. Gingrich wrote on Monday that Carson was “both helping poor Americans and enforcing the law.”

Carson teased the country earlier this year by reneging on his resignation despite one report finding that public housing residents’ safety and health have dangerously declined under the leadership of Carson.

“HUD has lost hundreds of staff members in the wake of a hiring freeze mandated by President Donald Trump. HUD’s enforcement office, tasked with going after the worst landlords, now has the lowest staff levels since 1999, according to a federal watchdog,” NBC News reported last year. “At the same time, Carson has proposed raising rents on poor families, requiring them to pay a higher percentage of their income for housing, and the Trump administration has pushed — so far unsuccessfully — for steep budget cuts.”

Throughout it all, it was revealed that Carson has kept a light work schedule. During a 31-week period in 2017, Carson gave himself five Fridays off. On five other Fridays, he left work before 2 p.m. to catch a flight to South Florida, where he has a $4.3 million mansion. For six other Fridays, his workday ended by 3 p.m. When he did work a full day at the end of the week, it was never more than a traditional 8-hour day.