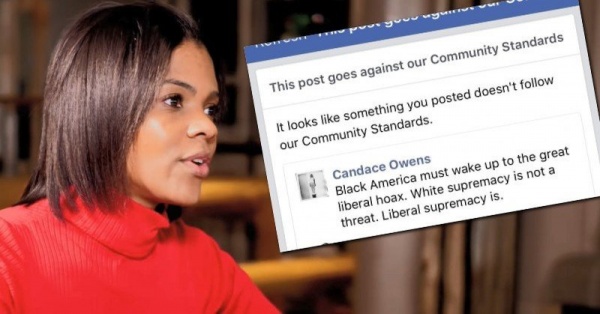 Candace Owens was happily casting herself as a voice for social media users silenced by the wicked forces of Facebook but didn’t have the means to fight back. It was a brilliant spin as Facebook apparently restored her ability to post her hatred with impunity after a desperate appeal to the president.

@facebook has restored my page! While I am grateful that I have a large enough platform to make noise and force reconsideration— what about the millions of people who do not?

What about the millions of conservatives who are forever silenced on social media?

“While I am grateful that I have a large enough platform to make noise and force reconsideration— what about the millions of people who do not?” Owens wanted the masses to believe she was asking in earnest.

That wouldn’t have been a surprise to anybody if it was actually true, but a quick look at Owens’ Facebook page hours after she first whined about an apparent phantom Facebook status showed she had just posted the day before.

Candace Owens has been spitting out hate ever since she introduced her tomfoolery to the world by saying the NRA was a civil rights group to designed to protect Black people from the KKK. Well, Facebook has finally had enough. Her hateful account has reportedly been suspended.

“My @facebook page has been suspended for 7 days for posting that white supremacy is not a threat to black America, as much as father absence and & liberal policies that incentivize it, are. I am censored for posting the poverty rates in fatherless homes,” she tweeted.

She also said, “Facebook has allowed every post that has falsely and horribly accused @realDonaldTrump of white supremacy to remain on its platform. But when a black woman begins discussing the TRUTH—which is that liberal policies have systematically ruined black homes—they censor. Unfair!”

That said, even though the college dropout who constantly tells Black people who don’t think like her that they are on a “Democratic plantation” claims she has been suspended — her Facebook page had activity as recently as days ago.

If she is really suspended, here is a reminder of her recent hate. Earlier this month, she said she would get a kick out of seeing Rep. Ilhan Omar get deported. “How funny if Trump just deported her?” Owens tweeted.

@In her defense, supporting terrorists in the Middle East seems to me to be the next logical step for a party that defends MS-13, demands open borders, and hates Jewish people and babies.

Separately, how funny if Trump just deported her?

@IlhanMN
How many more protesters must be shot, rockets must be fired, and little kids must be killed until the endless cycle of violence ends?

The status quo of occupation and humanitarian crisis in Gaza is unsustainable. Only real justice can bring about security and lasting peace.

“When we say nationalism, the first thing people think about, at least in America, is Hitler. He was a national socialist. If Hitler just wanted to make Germany great and have things run well, okay, fine,” Owens said Feb. 9 at a London event to launch the British chapter of Turning Point USA.

Owens also “resigned” from Turning Point USA, after calls for her to be fired.

Who knows if Owens was actually suspended? It’s already very clear she will do and say anything for attention.