John Gray's Mistress Says It Was More Than An Emotional Affair 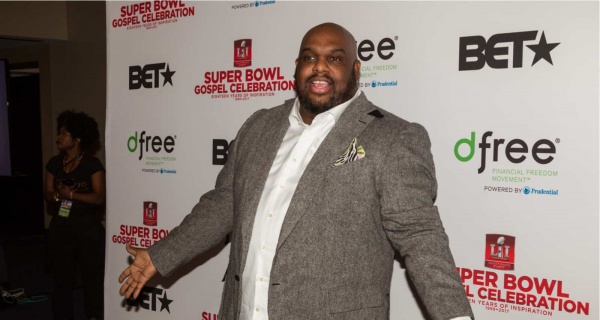 Date Posted: Friday, May 3rd, 2019
Pastor John Gray's alleged mistress is speaking out and she's spilling PIPING hot tea about their MORE than emotional affair. Find out what she said and deets on his show inside...
It seems like the more Pastor John Gray talks about this alleged affair, the worse it gets.
You'll recall, Pastor Gray and his wife Aventer Gray appeared on "The Real" recently to "clear up" rumors that he had been cheating on his wife and got another woman pregnant.
In the interview, he said he did NOT cheat on his wife, however, he did participate in an "emotional affair."
“Over a year ago, my wife and I were in a very difficult place in our marriage, and in that time, I began to converse with someone - other than a counselor, other than a pastoral leader, which is where I should have taken my issues and challenges - and began to converse, and I was even in the presence of that person one time,” Pastor Gray revealed while chatting it up on “The Real."
“But being in the presence of someone is not the same as sleeping with them. I did not sleep with anyone.”
Well, this "confession" didn't sit well with the woman he's allegedly cheating with and now she's spilling tea WITH receipts. Whew, chile.
The woman - who has remained anonymous - chopped it up with Larry Reid on the phone in December 2018 to discuss her affair with Pastor Gray. She claims they started getting close when he helped her with one of her employees who was dealing with addiction. The woman claims John was the one who started crossing boundaries with her that lead to them having an affair.
“It started with him. He likes to say 'breathing life into me.' So he was just there as far as talking to me, pretty much pastoring me, ministering to me. I called on him to do a favor to for a person that I knew that was struggling with some addiction issues. It was an employee of mine. That employee actually wound up speaking with him and it got him on the straight and narrow. So I sent him a text message telling him thank you. And he said, ‘Whatever you need.’ And I was like ‘Well thank you.’ And he said, ‘I’m talking about you.’"
The woman said she has known Pastor Gray half of her life.  She claims their conversations began getting deeper. She told Pastor Gray about her financial issues and he didn't hesitate to offer help. She said he paid her BMW off and would often send her money via the Cash App.
“It snowballed into ‘I just love you so much. I always loved you. I always thought about you. I always cared about you.’ “
"He would say, ‘The Lord told me that you need some money so go ahead and check your cash app. I already put money in your account. Then he’ll be like, ‘What color panties you got on? Let me see your nipples.’"
She said he told her that he didn't love his wife and “he only married her because she looked good on paper.” He supposedly also told her he was "tired of being behind this mask" and that he was going to leave her.

Pastor allegedly said to her about his wife: "She [his wife] don't suck, she don't f*ck. She don't even wash my drawers."
Don't y'all live in a mansion with a $200k Lambo parked outside?  Hire someone, sir!
The alleged mistress said all of this was going down as the couple was moving into their new church in Greenville, South Carolina.
She read off text messages between them and she also shared a voicemail Pastor Gray sent her where he's heard saying:
“Yo are you like ignoring me now? I’m just trying to make sure. Let me get this straight. I’m being ignored by someone who I have sought to sow seed into, get resources to. I’m in your city and I can’t get a call back. I just wanted to make sure I got my facts straight. Got it!”
In another voicemail, the first thing he told her was to erase the voicemail after she listens to it because his wife gets their text messages in his phone. He said his wife found out that they were in the same hotel as him, but "she does not know I went your room. She doesn't remember me leaving. She has your number."
The woman shared Pastor Gray would speak in TONGUES when he climaxed on Facetime.
"He likes to jack off on the screen and he comes and when he comes, he speaks in tongues. No joke. When we slept together, he jumped up!”
The woman said Pastor Gray's wife Aventer KNOWS about their affair and she said she's sure she's not the only one.
This is a mess. Listen to Pastor Gray's voicemails and the woman's phone interview below starting at the 1:02:30 mark: