Trump Associates Partied Away At Mar-A-Lago, Taxpayers Paid For It 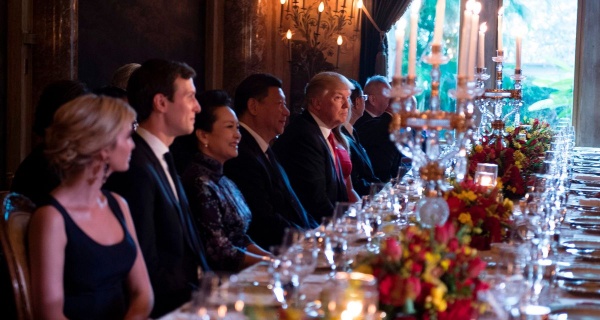 Donald Trump has spent close to 250 days of his time in office at his own properties. He loves none of them more than Mar-a-Lago, the Palm Beach, Florida, resort he’s affectionately dubbed the “Winter White House.” Earlier this year, the Government Accountability Office estimated that every time Trump absconds to Mar-a-Lago, it sets taxpayers back somewhere between $3-4 million. Much of this money goes directly to the club, which means taxpayers are not only paying for the president to take vacations, they’re paying the president for the president to take vacations.

According to a new report from ProPublica, the grift is more egregious than most realized, because of course, it is.

After Chinese President Xi Jinping visited Mar-a-Lago in April 2017, several Trump staffers congregated informally in one of the club’s bars. Among them, according to ProPublica, were Steve Bannon, then a White House strategist, and Joe Hagin, then the deputy chief of staff. The group reportedly told the bartender to leave so they could “speak confidentially.” The bartender obliged and was subsequently held out of the room by Secret Secret service. The group proceeded to serve themselves alcohol. No one paid. No one signed anything.

A little less than a week later, Mar-a-Lago wrote a bill for the missing alcohol: $838 plus a 20 percent service charge (despite, again, no server being present). The bill covered 54 drinks, all made with top-shelf liquor. It was sent to the State Department, which refused to pay it. It then went to the White House, which took care of it. In other words, a bunch of Trump staffers decided to get drunk at Mar-a-Lago, and instead of eating the cost, the club went out of its way to estimate a bill for the missing alcohol and force it on taxpayers.

This is only the latest example of Trump cashing in on his trips to his own club. In fact, Trump doesn’t even have to make the trip. In December, Quartz reported that the Secret Service paid over $54,000 to rent a tent that would be used for the Mar-a-Lago New Year’s Eve party. At the same time, 800,000 federal workers were not receiving paychecks because of Trump’s decision to shut down the government over funding for a potential border wall.

Despite the government paying the tent bill, Trump did not even attend the party. He was, however, able to charge $1,000 for tickets, up from $750 the year before, and $575 the year before that. It pays to be the president.