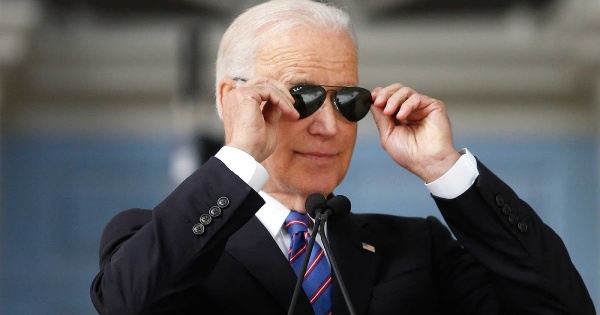 Former Vice President Joe Biden has said he will put an end to the “god-awful deliberate division” he feels exists in the United States if he beats President Donald Trump in 2020.

In his first full interview since announcing his intention to run as a Democrat candidate, Biden said he will offer a different slogan in response to Trump’s "Make America great again" motto.

"Make American moral again," Biden replied when asked by ABC's Good Morning America co-anchor Robin Roberts if he has his own motto. "Make America return to the essence of who we are, the dignity of the country, the dignity of people, treating our people with dignity and this god-awful deliberate division that’s been taken…separating people to aggrandize his own power."

Biden listed three main reasons he decided to run as a candidate.

“One: to restore the soul of America, the decency we represent, the honor and integrity of this country,” he said. “Secondly, to restore the backbone of America, which is the working class, the middle class, and this time we’re going to bring everyone along and leave no one behind. And thirdly, the reason I’m running is we have to unite the country, which we’re going to be talking a lot about because you can’t stay fractured like we are now."

Elsewhere during the interview, Biden was questioned about his handling of Anita Hill’s 1991 testimony against then-Supreme Court nominee Clarence Thomas after she accused him of sexual assault. Biden was chairman of the Senate Judiciary Committee and was responsible for overseeing the confirmation hearing, which critics argued did not take Hill’s allegations seriously enough.

During a previous appearance on The View, Biden said he didn’t think he treated Hill badly. “I’m sorry she was treated the way she was treated,” Biden said. “There were a lot of mistakes that were made across the board, and for those, I apologize.”

Speaking to The New York Times, Hill said she did not accept Biden’s comments as a sincere apology. “I cannot be satisfied by simply saying, ‘I’m sorry for what happened to you.’ I will be satisfied when I know there is real change and real accountability and real purpose,” Hill said.

Biden also responded to the criticism he has received from several women who accused him of inappropriate and unwelcome touching over the years.

According to a recent Morning Consult poll, Biden is way ahead of his nearest rival, Senator Bernie Sanders of Vermont, in the race to become the 2020 candidate. The survey of 15,475 likely primary voters ranked Biden in first place with 36 percent, followed by Sanders with 22 percent and Senator Elizabeth Warren of Massachusetts in third with 9 percent.