Will The Economy Sweep Trump To Victory? 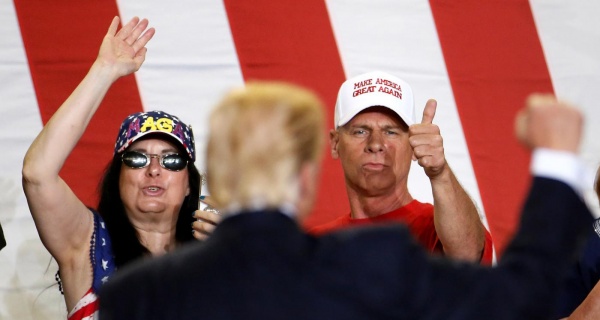 President Donald Trump has regularly touted his economic success, but a new poll shows that the commander in chief's handling of trade and economic policies has made some voters more likely to oppose him in the 2020 election.

Respondents' reactions to his stance on international trade, an arena in which he has imposed tariffs on a range on foreign items, was less positive. Thirty-one percent said that Trump's handling of international trade had made them more likely to support him, but 36 percent said that his trade policies made them more likely to oppose his re-election.

In addition to passing tax reform legislation, the president has heavily pushed deregulation and touted the country's economic growth and job creation.

Statistics released last week showed that the economy had grown 3.2 percent in the first quarter of the year, outpacing the expected growth rate of 2.3 percent. Forbes reported that the rate of economic growth is 45 percent above that during the final 27 months of Barack Obama's tenure.

Trump touted these gains on Friday.

"GDP is an incredible number. But remember this: Not only that, we have a great growth— which is growth. We have great growth and also very, very low inflation. Our economy is doing great," he said.

A Georgetown Institute of Politics and Public Service poll from earlier this month found that 58 percent of voters approved of Trump's economic performance, but 59 percent said that they were very or somewhat worried about an economic downturn.

Recent data show that the economy is growing at about 3 percent a year. But rising inflation means that real wages, or actual purchasing power, has decreased 9 percent since 2006, reported Vox, citing data from the Federal Reserve of St. Louis, U.S. Bureau of Labor Statistics .