America Has More People In Jail Than Any Other Country 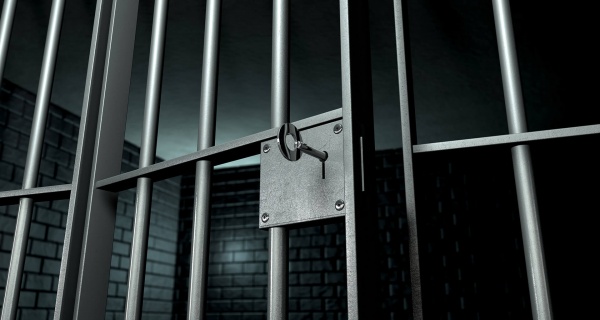 Despite bipartisan efforts to reform the criminal justice system and reduce the length of sentences, the number of people in American prisons has seen only a slight decline in recent years, according to data from the federal Bureau of Justice Statistics.

The imprisonment rate for all state and federal prisoners decreased 2.1 percent year-on-year in 2017, the most recent year for which data is available.

Despite the overall decline, the U.S. remains the nation with the largest known incarcerated population in the world (it's unclear how many prisoners are in China).

Changing the trend in any significant way will require major reforms, according to The New York Times.

'If we keep working on the kinds of criminal justice reforms that we're doing right now, it's going to take us 75 years to reduce the population by half,' said Rachel Barkow, a sentencing expert at New York University School of Law and author of 'Prisoners of Politics: Breaking the Cycle of Mass Incarceration.'

'The kinds of reforms we're seeing now are really modest,' she told The New York Times. 'I'm glad were getting them. But this is not transformative yet.'

The overall incarceration rate in the U.S. has declined 13 percent since 2007, but still remains 236 percent higher than it was in 1978.

The decrease over the past decade was largely thanks to a 2014 decision by the U.S. Sentencing Commission to reduce sentencing guidelines for drug crimes – a change that accounts for about a third of the decline from 2016-2017.

However, a disparity remains from one state to the next in the prison and jail populations: some have seen significant reductions, while others continue to see the number of incarcerated people climb year after year.

Nearly half of U.S. adults have had a relative in jail or prison

Nearly half (45 percent) of all American adults have an immediate family member who has been incarcerated, according to a new report.

That amounts to roughly 113 million people who have been touched by mass incarceration in the United States, according to the survey of 4,041 Americans.

The research was done by FWD.us, a non-profit established by American business and tech leaders advocating for criminal justice and immigration reform, in partnership with Cornell University.

Right now, an estimated 6.5 million Americans have an immediate family member in jail or prison. And U.S. jail and prison populations have swelled to four times what they were in 1980, with about 1.5 million people in state and federal prisons on any given day in America.

New York, New Jersey and Connecticut all saw significant drops, largely due to policy changes. For example, some states have reclassified some crimes that were previously felonies as misdemeanors, while others have given sentencing judges more discretion.

California stands apart for having one of the biggest reductions in the past 10 years, which was the result of a U.S. Supreme Court order in 2011 that the state must remove 30,000 inmates from its overcrowded prison system.

Nationwide, 55 percent of state prisoners were serving sentences for violent offenses by the end of 2016, according to the Bureau of Justice Statistics.

That's despite a dramatic drop in the nation's violent crime rate – an indication that America has such a large prison population not just because it locks so many people up, but because it keeps them incarcerated for longer periods of time.

The U.S. accounts for roughly 4 percent of the world's population, though it has more than a third of the people serving sentences worldwide, according to an international survey entitled, 'Life Imprisonment: A Global Human Rights Analysis.'

As prisoners age within the system, the cost of caring for them grows – and more than 10 percent of inmates were age 55 or older in 2017.

Racial disparities in the prison population persist, though the rate of African Americans in prison decline by nearly a third in the past 10 years.