Trump's Interview With Sean Hannity Is Filled With Authoritarianism Comments 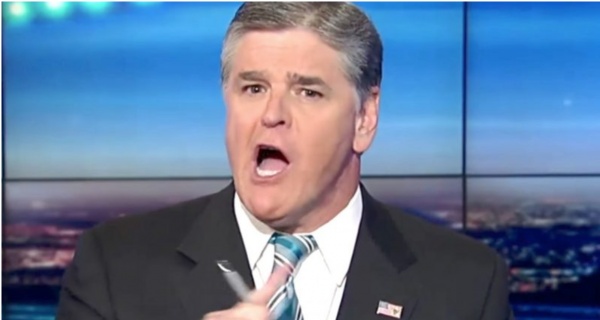 President Donald Trump called into Hannity on Thursday night. As is usually the case whenever the president and his favorite Fox News personality convene on the air, the “interview” was extremely long — about 45 minutes this time — and incredibly terrifying.

Goaded by Hannity, Trump railed against Special Counsel Mueller’s investigation, which he described as a “coup” to “overthrow the United States government.” He also claimed the “top people” at the FBI were corrupt, and that Hillary Clinton “destroyed the lives” of people working on Trump’s campaign. (Several Trump campaign staffers were indicted as a result of Mueller’s investigation, mostly for lying to the government. There’s no evidence suggesting Clinton somehow forced them to do this.)

Seemingly working in coordination with Attorney General William Barr, Trump has claimed Robert Mueller’s report — a redacted version of which was released by the Justice Department last week — exonerates him from colluding with Russia during the 2016 campaign, and from obstructing justice after the investigation commenced. Trump made sure to tip his hat to Barr while speaking with Hannity on Thursday. “The attorney general said it better than anybody the other day when he was asked,” he said. “‘Yes, I think they were spying on the Trump campaign.’ You can’t say it any better than that.”

Trump then essentially admitted that his 2017 claim that President Obama “wiretapped” Trump Tower during the campaign was total bullshit.

Regardless of how many times Trump tweets “No Collusion – No Obstruction,” the Mueller report painted a damning picture of the president’s efforts to subvert the investigation, leading a growing number of Democrats advocate or impeachment. Trump and his allies — none among them bigger than Hannity — have done all they can to instead draw America’s focus to the origins of the investigation, claiming it was an illegal hoax perpetrated by Democrats and “Dirty Cops” that needs to be investigated. Irrelevant to these Law and Order stalwarts are Trump’s potentially criminal actions, of which there now exists a bounty of actual evidence, as Fox News legal analyst Judge Andrew Napolitano laid out in detail earlier on Thursday.

The more obvious it has become that the president is guilty of a multitude of crimes, the deeper he has retreated the deranged conspiracy theories he’s concocted in tandem with Fox News. His rhetoric may have reached a new high water mark Thursday night when he alleged with frightening bluntness that the Justice Department was working with his political enemies to bring down the government. “This is the greatest political scandal in the history of our country,” he said. “Again, bigger than Watergate, because it means so much. This wasn’t stealing information from an office in the Watergate apartments. This was an attempted coup. It’s inconceivable. Like a third-world country. Inconceivable.”

The 45-minute call was a terrifying reminder that there is no line Trump won’t cross in service of his own ego, which as Rolling Stone‘s Jamil Smith laid out earlier this week, is, with the 2020 election looming, a growing threat to national security. Coming in the heat of the White House’s unconstitutional efforts to obstruct Congress from conducting its duty to provide oversight, the unhinged interview was also a reminder that Trump views himself as an authoritarian who should be allowed to operate independently of federal law, the Constitution and any other mechanism of the government that curtails his ability to do whatever he wants.

Hannity did not ask Trump about any of the obstruction of justice revelations in the Mueller report.