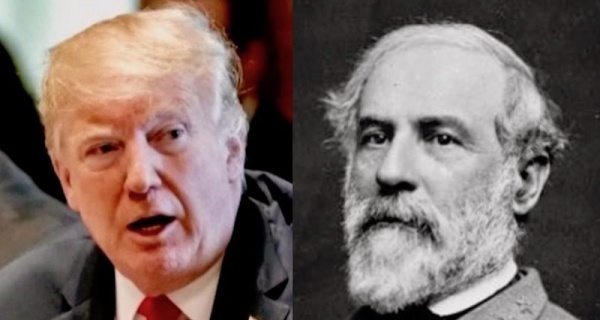 Date Posted: Friday, April 26th, 2019
Donald Trump doubled down Friday on his infamous claim that there were “fine people” on both sides of the deadly Charlottesville protests in 2017, arguing the comment was “perfect” because Robert E. Lee was “a great general.”
Trump made the Confederacy-embracing defense one day after Joe Biden launched his 2020 campaign with a sharp rebuke of the president’s post-Charlottesville statement, which critics say equated neo-Nazis and white supremacists with those who oppose their hateful ideologies.
“If you look at what I said you will see that that question was answered perfectly,” Trump told reporters outside the White House. “I was talking about people that went because they felt very strongly about the monument to Robert E. Lee, a great general, whether you like it or not.”
To this day, it remains unclear which “fine people” Trump spoke of, considering most attendants at the Aug. 12, 2017 “Unite the Right” rally in Charlottesville, Va., were adherents of racist and white supremacist groups.
The event was organized to protest the removal of a statue of Lee, who as a Confederate general fought the Union in the Civil War to preserve the right of enslaving African-American people.
But the Charlottesville protest quickly escalated into violence, as far-right demonstrators wielding weapons and decked out in tactical gear took to the streets of the sleepy college town, carrying torches and raising their right arms in Nazi salutes while chanting “Jews will not replace us!” and “blood and soil!"
A 32-year-old counter protester was killed in the chaos when a neo-Nazi plowed his sports car into a crowd.
It was in the wake of that tragedy that Trump maintained there were “very fine people” on both sides.
“You had some very bad people in that group,” Trump said at the time of the far-right protesters, speaking from his namesake skyscraper in Midtown Manhattan. “But you also had people that were very fine people on both sides.”
The president stressed that “the neo-Nazis” and “the white nationalists” should be “condemned totally."
“But you had many people in that group other than neo-Nazis and white nationalists, ok?” he added.
Trump has never specified who those “fine people” were, prompting Democrats to accuse him of implicitly endorsing violent racism.
Biden joined that Democratic chorus on Thursday.
“In that moment, I knew the threat to this nation was unlike any I had ever seen in my lifetime,” the former vice president said in a video announcing his 2020 bid. “I wrote at the time that we’re in a battle for the soul of this nation. Well, that’s even more true today.”
Other Democrats questioned the veracity of Trump’s latest defense of Lee.
“General Robert E. Lee fought for slavery,” Hawaii Sen. Brian Schatz tweeted, “and against America.”