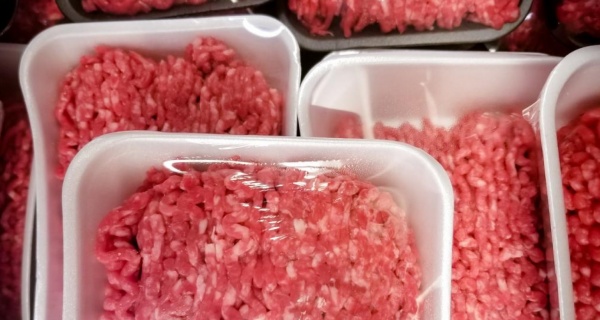 Date Posted: Thursday, April 25th, 2019
A Georgia meat producer is recalling more than 100,000 pounds of ground beef, believed to be contaminated with the same E. coli strain connected to a growing outbreak that has sickened 156 people in 10 states.
K2D Foods, doing business as Colorado Premium Foods in Carrolton, Georgia, is recalling about 113,424 pounds of raw ground beef products that may be contaminated with E. coli O103, according to the Department of Agriculture's Food Safety and Inspection Service.
Since the beginning of March, while there have been no deaths reported, 20 of the 156 people infected with the strain of Escherichia coli O103 have been hospitalized, the Centers for Disease Control and Prevention said Tuesday.
Kentucky, Tennessee, and Georgia have seen the highest number of cases, with 65, 41 and 33, respectively. Other states affected are Florida, Illinois, Indiana, Minnesota, Mississippi, Ohio, and Virginia, the CDC says.
K2D recalled the ground beef, which had been on the dates March 26, March 29, April 2, April 5, April 10, and April 12, after some of the product tested positive for E. coli O103. It was collected from a Tennessee restaurant as part of the ongoing investigation being conducted by the CDC and the Tennessee Department of Health.
The ground beef in 24-pound packages was shipped in cardboard boxes marked “Ground Beef Puck" with “Use Thru” dates of 4/14/19, 4/17/19, 4/20/19, 4/23/19, 4/28/19, and 4/30/19, the USDA says. The product was shipped to distributors in Ft. Orange, Florida, and Norcross, Georgia, which sent it to restaurants.
The voluntary recall was announced late Tuesday night, suggesting that federal and state officials involved understand the seriousness of the outbreak, says Bill Marler, a Seattle food safety attorney, and publisher of Food Safety News.
"Given the numbers of people sickened with E. col iO103 and the number of states involved, I expect the scope of the recall to expand in the coming hours," he said in a statement sent to USA TODAY.
Those sickened in this outbreak have reported eating ground beef at home and in restaurants, the CDC says. The agency is not recommending that consumers avoid eating ground beef at this time. But consumers and restaurants should handle ground beef safely and cook it thoroughly to avoid passing on any illness, the CDC says.
E. coli infections typically occur three to four days after consuming the germ, the CDC says. It can cause severe stomach cramps, diarrhea (often bloody) and vomiting for around five to seven days.
In severe cases, patients may get hemolytic uremic syndrome, a type of kidney failure. However, no cases of kidney failure have been reported in connection with this outbreak, officials say.