Pastor Challenges John Gray And Others To Live More Minimally 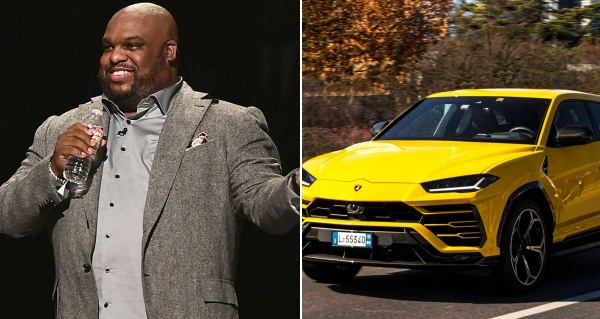 Date Posted: Tuesday, April 23rd, 2019
Jomo Johnson, a Washington, D.C., pastor, posted a video to social media on Easter Sunday initiating #TheJesusChallenge to live one year minimally by giving up one possession each day, week or month until next Easter.
His first nomination for the challenge was Pastor John Gray of Relentless Church in Greenville, S.C., who received backlash for buying his wife a $200,000 Lamborghini last year for their anniversary and for wearing expensive Yeezy sneakers.
“Jesus told the rich young ruler, sell all you have, give it to the poor, then you’ll have riches in heaven,” Johnson said in the video. “We want to be able to follow Jesus in this lifestyle of minimalism.”
In December, Gray said he purchased his wife’s new ride through funds earned from his book and television deals, not with income from the church, The Charlotte Observer reported. The South Carolina faith leader was featured in a The New York Times story headlined “Let He Who Is Without Yeezys Cast the First Stone” about his high-priced footwear.
“John Gray, a pastor from South Carolina, was shown in blood-red Air Yeezy 2s, the sneakers made in collaboration with Kanye West, that were going for upward of $5,000,” The New York Times wrote.
If we want a fulfilled and happy life it’s actually in giving that we receive- so again Jesus taught this," Johnson said.
It's The Jesus Challenge and he's calling on Christians to live a more minimalist lifestyle for at least a year.
“You can make the choice to give up one possession per month, one possession per week, or if a person wants to go the extreme we want to challenge them to give up one possession per day," Johnson said.
He also says donate those items and record your experiences and giving.
“This 365-day challenge is really a call by which we can detach from someone from some of the material things," Johnson said.“In 2017, I made the choice I was really going to downsize a lot of my possessions- car, clothes.
Dr. Donny Mathis teaches the New Testament at North Greenville University and has this to say about how a minimal lifestyle relates to Jesus and scripture.
“If you want to boil it down to a minimal kind of thing it’s a matter of the heart," Mathis said. "Jesus was not a man of great wealth. He would not have been viewed as in the larger society as one of great esteem or highly thought of."
Mathis says wealth can be used for evil or for good.
“Whether your life is a life of poverty or a life of wealth that there is a recognition that God is the one creator of all things, the king of all things, and the one we are to pursue is God himself," Mathis said.
He says God wants us to be content with what we have and Johnson realizes The Jesus Challenge is a challenge, but one he says will bring the invaluable gift of less is more.