McConnel Vows Again To Stop Legislation From A Democratic President 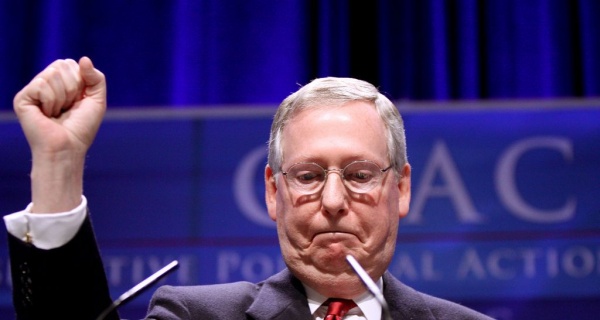 Date Posted: Tuesday, April 23rd, 2019
Senate Majority Leader Mitch McConnell is threatening to kill popular legislation and policies if voters elect a Democratic president in the 2020 election.
"If I'm still the majority leader in the Senate [in 2020], think of me as the Grim Reaper," McConnell told voters in Owensboro, Kentucky, on Monday.
"None of that stuff is going to pass."
That stuff McConnell is so eager to kill? Popular progressive ideas like the Green New Deal and Medicare for All, which would help to clean up the environment and provide even more access to affordable health care. Even if voters reject Trump and the Republican agenda in 2020, McConnell is determined to do what he wants rather than what the voters want.
"I guarantee you that if I'm the last man standing and I'm still the majority leader, it ain't happening," he said. "I can promise you."
McConnell’s rhetoric is a throwback to his obstruction during President Barack Obama’s tenure when he refused to even hold hearings on the Supreme Court nomination of Merrick Garland.
Earlier this month, McConnell wrote an op-ed attacking Democrats for "mindless, undiscriminating obstruction for the sake of obstruction" because they have opposed some of Trump's more radical or simply unqualified nominees.
McConnell fumed that Democrats were somehow engaging in "historic" and unprecedented behavior.
"This new, across-the-board obstruction is unfair to the president and, more importantly, to the American people," McConnell wrote, though he engaged in exactly that sort of obstruction when Obama — who had the mandate of 65.9 million voters behind him after the 2012 election — was president.
Now McConnell is openly stating he will resort to the same tactics again. If America elects a Democratic president, McConnell will do everything in his power to stop the will of the voters. Again.