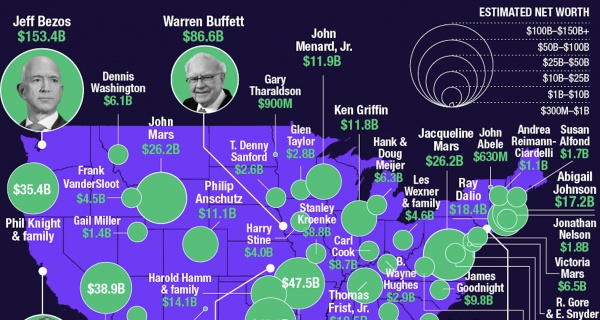 Three families of dynastic wealth — that’s the Walton, Koch, and Mars families — have seen their wealth increase close to 6,000% since 1982, according to the Billionaire Bonanza report by the progressive think tank Institute for Policy Studies.

As the Waltons, Kochs, and Mars families have seen their wealth increase, the median household wealth for Americans has fallen by 3% since 1982. American families have started to take notice. A new poll by Politico and Morning Consult show that a staggering 76% of registered voters want the rich to pay more in taxes.

“Most families are struggling to get by,” Josh Hoxie, co-author of the report, told Yahoo Finance. “One in 5 have 0 or negative wealth. Two in 5 couldn't come up with $400 if they needed to in an emergency.

“And, in the meantime, wealth is funneling to the wealthiest families in the country. And the Waltons, the Mars, and Kochs are the wealthiest of the bunch.” According to the Forbes 400 list, the Waltons, whose fortune comes from control over Walmart (WMT), have $169.7 billion. The Kochs (brothers Charles and David are most well-known) have a diversified industrial conglomerate and are worth $107 billion, while the Mars candy heirs are worth $72 billion.

The report didn’t only highlight extreme wealth among families.

Jeff Bezos, Bill Gates, and Warren Buffett, the three richest people in the world, are wealthier than the bottom half of the country — combined.

This is also reflected in incomes, according to the report. Average pre-tax incomes for the bottom 50%, when adjusted for inflation was $16,000 in 1980. More than 30 years later, it was $16,200. In comparison, incomes doubled for the top 10%. This snowballs the wealthier you are. Incomes tripled for the top 1%. And for the top 0.1%? Incomes quadrupled.

“We've witnessed over the past 30 years is extreme wealth concentration going to the top and the rest of the country struggling to get by,” Hoxie said.

A recent Moody’s report shows that while middle-class families fare a little better under Trump than they had previously, income inequality is getting worse. One of the culprits is Trump’s policies.

The report recommends both direct wealth taxes and a stronger inheritance tax to address extreme wealth inequality. It was reported in July, however, that the Trump administration was mulling additional tax cuts for the rich, to the tune of $100 billion.

While stumping for Republicans ahead of next week’s midterm elections, President Trump pledged tax cuts for the middle class. But with Congress in recess until after the elections, no new bills were introduced. The president and Rep. Kevin Brady (R-TX) committed to pursuing tax legislation next year in a statement released Wednesday.